Some thoughts on "the Book of Eli" 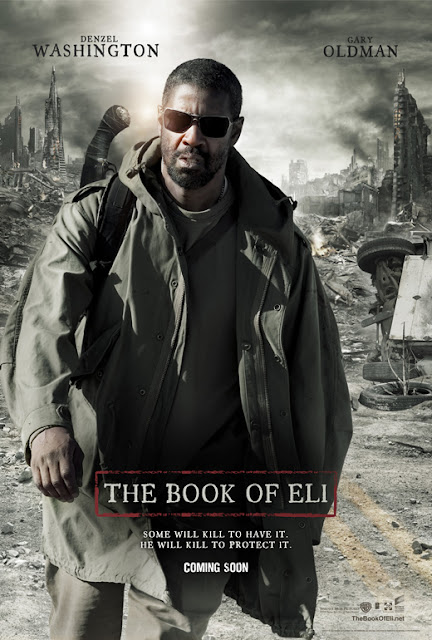 I just finished watching The Book of Eli with Olly... and have to say I absolutely loved it. On so many levels!

Visually it is stunning... the visuals have a bleached-out, over-exposed, high contrast, almost sepia look and feel about them. I guess that's what it would look like "after the flash".

The soundtrack by Atticus Ross is phenomenal... very modern and dissonant... without being cliched. I will need to track it down and give it a good listen.

The acting is first class... with Denzel Washington portraying "Eli" as a post-apocalyptic Zatoichi-like character who is journeying westwards with a book... on a mission to find a safe haven for it.

I won't spoil the story for you... other than to say the book is a Bible.

The themes that run through the film... based on the Bible... are best summed up in two unrelated quotes...


Carnegie: To his men "Put a crew together, we're going after 'em."
Redridge: For a f**kin' book?
Carnegie: IT'S NOT A F**KIN' BOOK! IT'S A WEAPON. A weapon aimed right at the hearts and minds of the weak and the desperate. It will give us control of them. If we want to rule more than one small, f**kin' town, we have to have it. People will come from all over, they'll do exactly what I tell 'em if the words are from the book. It's happened before and it'll happen again. All we need is that book.


Eli: In all these years I've been carrying it and reading it every day, I got so caught up in keeping it safe that I forgot to live by what I learned from it.

They have no intention in living by what it says... they conveniently skip passages that aren't to their liking. They look outward... using the Bible to point and to poke... to condemn... without using it to look inward.

There are also folks who only look inward... who are too busy reading and studying and protecting the Bible that they fail to put it into action. Eli falls into the second camp. By his own omission... he's been too busy caring for the book that he's forgotten to apply it to his life.

This changes when he feels responsible for the welfare of Solara (Mila Kunis).

But if we put it into practice... it becomes a very powerful artefact indeed. Something that can be misused... abused for the whims and wants of man (think elements of the Christian "religion" today).

It is also something that, if correctly applied, can be life changing. Imagine if we all did unto others what we would want them to do to us... just think how life would be? Or, more importantly, if we took Jesus at His word... and sought to live for Him... where, for us to live lives to the fullest, then we would have to die to self and love extravagantly?

Just imagine... what if?

The Book of Eli is a violent film... with scenes I certainly wouldn't want my children to see until they were much older. But, that aside, it is a film I would recommend... because of the themes touched upon above... and for the visuals, acting and score.

Tx
Posted by weareallghosts at 11:22 pm

Email ThisBlogThis!Share to TwitterShare to FacebookShare to Pinterest
Labels: Faith / Love / Culture, Needs to be seen to be believed