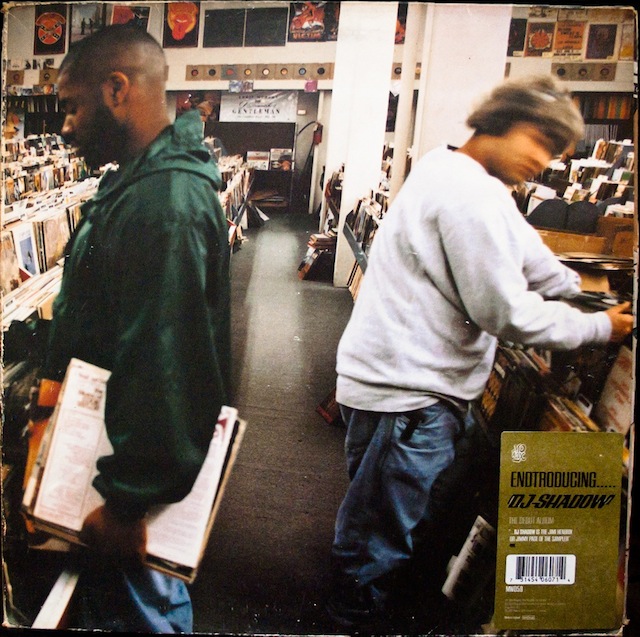 In my ongoing, semi-regular look at classic albums ... I come to the letter ’E’ and there is one album that starts with an ’E’ that stands head-and-shoulders above its peers ... “Endtroducing.....” by DJ Shadow.

This album was a game-changer when I bought it on the day it was released. It took the beats and attitude of hip hop and took it to a whole other level ... and in doing so DJ Shadow lived up to the promise he had shown prior to the release.

Instrumental hip hop has never been better ... some folks have come close, in my opinion, but no one ... not even Shadow himself ... has surpassed this album for me.

The variety and sonic density of the music presented beggars belief ... he really did take instrumental hip hop and, dare I say, dance music in general, to another level.

Shadow’s use of polyrhythms and obscure sounds blows my mind. What shouldn’t work ... in his hands does. The ethereal sound of the harp juxtaposed against thrash metal drums ... wonky synths ... off kilter vocal samples ... female vocals ... chunky drones and super-chunky, high fat beats ... soulful samples ... hip hop dialogue ... all work to make this album one in a million.

If you don't have this release in your collection then get it ... now!

The only thing that disappoints me about it ... if i am honest ... is the lack of the full version of “midnight in a perfect world” ... which is one of the best tracks on the release and, thankfully, featured on a separate single release. Well worth finding if you haven’t heard it ... the spoken word poetry is truly inspiring.

Posted by weareallghosts at 10:43 pm