Stabbing A Dead Horse tour ... at the 13th Note, Glasgow 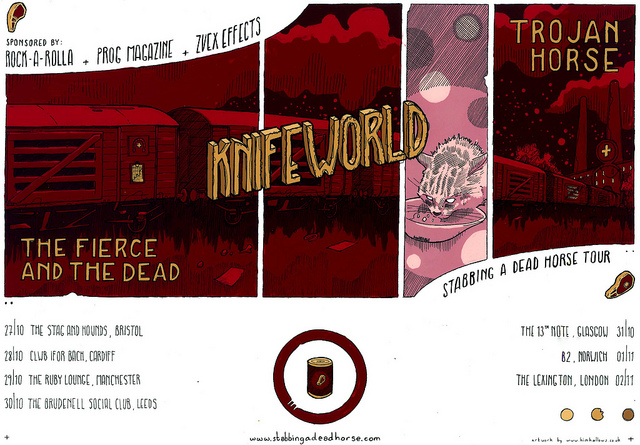 On Wednesday night I had the opportunity to attend the 'Stabbing A Dead Horse' tour's Glasgow leg ... and boy was I impressed.

I'll be upfront and say ... I was there for 'The Fierce And The Dead' and they rocked my socks off ... but the other two bands that I was able to catch - local band 'We Are The Physics' and 'Trojan Horse' were impressive too. Unfortunately I had to leave before 'Knifeworld' came on. First up were local band 'We Are The Physics'. It was hard for me to define their sound ... other than to make comparison to Devo ... a loud, frenetic, Math Rock-inspired Hardcore-loving alternate-universe Devo. Their quirky on-stage antics were definitely a crowd-pleaser and I had a rather large smile on my face for most of their set. Their 1 second songs and their ode to Goran Ivanisevic were entertaining ... and whilst they claimed not to be 'prog' ... they set up the night very nicely indeed. I will do my best to see them again ... and I would heartily recommend them to my local friends ... they are well worth seeing. Next up were the band I was here to see - 'The Fierce And The Dead' ... otherwise know as the instrumental prog rock band that the awesome Matt Stevens plays guitar in.

Simply put ... they were brilliant. Led by Kevin Feazy on bass ... backed by Stuart Marshall on drums with Matt and Steve Cleaton on guitar ... they blew me away.

Each player played their part ... creating the most beautifully vibrant instrumental rock. Music that I love to listen to on my iPhone, iPod or hi-fi ... but music that is intended to be freed ... to be let loose in the wild. I was privileged to witness their chemistry in action. Stevens was on fire ... but then so were all the other members ... each contributing to the whole. Feazy's bass playing was exemplary ... the kind of playing young children with bass-playing aspirations could only dream about. Cleaton was a suitable yin to Stevens' yang ... they really sharpened each other ... playing off and really complimenting each other in an utterly delightful manner. However ... the chap who stole it for me was Marshall ... he was simply off-the-hook. His drumming was frenetic and vibrant ... fast paced yet wonderfully rhythmic. He gave his all. If drumming in a rock band was an Olympic sport ... he would be a shoe-in for a gold. He was that good and it was a pleasure to meet him afterwards. He is a really nice chap ... as is Stevens who towered over me and whose smile is larger than he is tall ... and if you've ever met him in the flesh you'll know how big that is. 'The Fierce And The Dead' were brilliant ... and I really hope to see them live again. They deserve to be huge. Britain has talent ... and they are it! In fact, it was a night for bass players busting moves on the floor ... with their mustachioed bass player performing some form of advanced double-jointed yoga whilst contributing to some seriously meaty tracks. I struggle with the term 'prog'. It has terribly negative connotations to it that ... well ... were not on display this evening. 'Trojan Horse' were wonderfully versatile with tremendous timing and a preference for melody. They weren't overblown. They were tight and interesting ... a delight to experience ... and one more band that I need to see again.

Unfortunately I couldn't stay to see 'Knifeworld'. It was a school-night and I'm getting to *that age* where I need my sleep. I would have loved to see them ... witness their number trying to squeeze into the intimate space within the 13th Note ... but it wasn't to be.

I thoroughly enjoyed the gig and still can't believe I saw 3 great bands for £5. I would have happily paid more ... and ensured 'The Fierce And The Dead' were commemorated with a tee ... which was ridiculously priced at £8. I mean ... a gig and a tee for £13. Unbelievable.

Congratulations to everyone who made the 'Stabbing A Dead Horse' tour the success it was. I look forward eagerly for more.

Tx
Posted by weareallghosts at 5:02 pm

Email ThisBlogThis!Share to TwitterShare to FacebookShare to Pinterest
Labels: For Your Listening Pleasure, live music