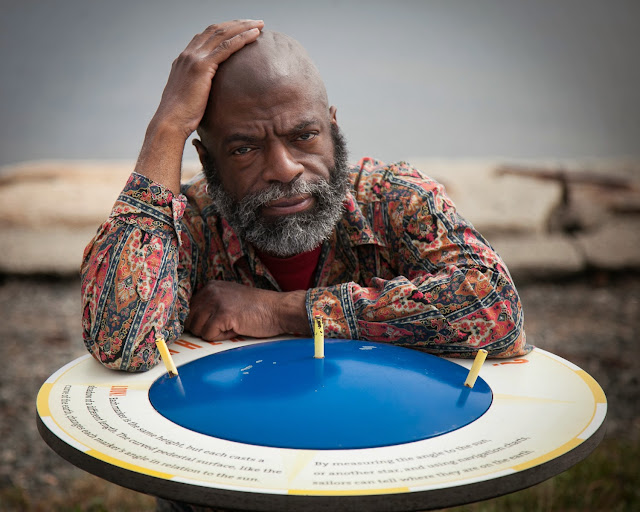 I'll admit to being happily blown away by the response I've had to my 'seven questions' ... this wee interview has opened so many doors and introduced me to so many wonderful creatives.

Case in point is David Gerard, an ambient musician whose work I was not familiar with until I received an email from him. I did my due diligence and I really, really liked what I heard.

David's music is fascinating. He's been doing what he's been doing for thirty years and in that time he's learnt his craft ... and it shows. I hope to work with him in the near future on a retrospective mix of his work for 'circumambient' ... and there is also the possibility of a release on 'weareallghosts' too. He is someone I want to work with.

Here is what he had to say in response to my seven questions:

1) Who are you and what do you do?
I am an ambient/electronic musician and composer, who has been recording since 1984. Wow - seeing that in print makes me feel really old (!) My first original composition was “A Piece Of The Desert” back in 1984. I performed it along with some other stuff at The Knitting Factory in NYC, where I was living at the time. I currently reside in Massachusetts, where I moved in 1992.

I did not begin commercially releasing material until 2004, surprisingly enough. Since then, I have recorded sixteen albums - fourteen as a solo artist, and two as part of an electronic ensemble called Elysium.

I am blessed to be a regularly featured artist on ambient/electronic stations on SomaFm internet radio, as well as having my compositions appear on labels ranging from Wayfarer Records to Sounds4Good Recordings.


2) What are you working on at the moment?
I am juggling three works-in-progress: one is a musical collaboration with my friend, guitarist Phil Wyman. We recently had our piece, “Before I Wake” included on the electronic compilation, “Album In A Day, Vol. 8” released by BFW Recordings (founded by ambient musician Brin Coleman); an ambitious series called “Music For Planetariums”, partly inspired by the legendary “Hearts Of Space” recordings.

I recently connected with musician/composer Kevin Braheny (who now goes by the name Kevin Braheny Fortune) - he had some nice things to say about “Braheny’s Comet”, a track I composed for Elysium's debut, “First Light” in 2007. As his work was always an inspiration to me, I felt gratified and affirmed by his praise; the third project is to remaster and release “At The Edge Of The Earth”, an album I recorded for Wayfarer Records, which was ultimately rejected. I think it is among some of my best work, and the positive thing that came out of being “dumped” by the label was it taught me a valuable lesson about being true to your artistic vision, even if some folks don’t seem to get what you’re doing.


3) Who inspires you?
- Name an artist who has inspired you.
My “inspirations” (if that’s a word I am forced to use) are pretty varied. Two of my biggest inspirations might surprise you: John Cage and Jaco Pastorius.

I had been following Cage’s work for some time, and in the mid-80’s, I was fortunate enough to meet him at a concert which featured his work at NYC’s Town Hall. There was a reception afterwards, and I got the chance to talk to him at great length about what I was doing - being in the embryonic stage of my career, I had a lot of questions, and wanted the benefit of his wisdom. He was probably the first person I respected who reminded me that you cannot concern yourself with how your music is perceived or received by the folks who hear it - you need to be true to yourself.

That sentiment was similarly echoed by the legendary jazz bassist, Jaco Pastorius. I saw him in concert at the Tribeca Five And Dime around or about the same time. We had a discussion at the bar between sets, and we just connected on so many levels. During the course of our brief friendship (he died sadly in 1987, at the tender age of thirty-five) we talked a lot about the creative process - he affirmed to me that whether I was self-taught or a graduate of Julliard didn’t matter - what did matter was the passion and commitment I brought to making music.

Another artist, though not a direct influence on my work has been Mother Mallard’s Portable Masterpiece Co. Around the time of my third release, “Bremsstrahlung”, I was listening to Pandora and heard their piece “Ceres Motion” and was completely blown away. Later, learning their backstory (including being recognised as the very first electronic music ensemble), I was driven to reach out to group member David Borden. I sent him a couple of my CD’s, and asked humbly if he would give me some feedback. Not only did he really like the stuff I was composing/recording, he told me many of my pieces reminded him of the early work that he and fellow musicians Linda Fisher and Steve Drews had done in Bob Moog’s legendary recording studio in Trumansburg, NY. That was just weird - I had never heard their music until 2006, yet my work reminded him of theirs? It took awhile for that to sink in. Since then, I have become very good friends with him and Steve Drews, who wrote the liner notes for my 2009 CD, “Rubaiyat” - that title was a riff on Tangerine Dream’s 1975 album, “Rubycon” - those guys are an admitted influence.


4) What drives you to do what you do?
In the beginning, I was driven by a health scare in 1994 - I was diagnosed with a terminal illness, and given eighteen months to live. After the shock of that ebbed, I realized on a visceral level that time is a precious gift - I began asking myself, “What will my legacy be?” That is when I returned to my music, and made a serious commitment to put it out there in the world - I had stopped pursuing my passion for some time, and was worried I could not revive that creative urge. Thankfully, a friend gave me the book “The Artist’s Way” by Julia Cameron. Usually, I find such self-help / spiritually informed books a little too new-agey for my sensibilities, but at that point, I felt I had nothing to lose. In the end, “The Artist’s Way” allowed me to jump back into composing/recording, and help dissolve my apprehensions.

I also began reading “Spontaneous Healing” by Dr. Andrew Weil. I made some serious dietary and life changes, and turned my health around. While I do have some minor issues, I am in good health and thankful for the second chance.

These days, I am less “driven” to record as I am motivated - I don’t approach my work with any less passion, however. Music is my gift, my calling, and my legacy. And I still continue to be amazed when I birth a particular piece of music - part of me says, “Gee, fourteen albums later, and you haven't run out of things to say?" I know that I am a conduit for whatever unseen forces are working through me, and have learned the art of getting out of my own way.


5) What values do you wish your creativity to express?
That’s a tough one to answer. I honestly don’t think I want my creative process to necessarily reflect any “values” per se: what I hope is that the expression of my creativity either inspires or transforms people when they listen to it. I have been told by many holistic practitioners that they use my music to provide ambience for massage, acupuncture and the like, and I am honoured by that. I would also hope that my story serves as an inspiration that it is never, ever too late to express your own creativity, and I would impress upon everyone to find that one thing you are passionate about, and pursue it for it’s own sake - most likely you will find a way to make it profitable, but that is not the end goal. Boy - it’s taken me awhile to get that, but now I do.


6) What role does community play in what you do?
I am very supported and affirmed by the ambient/electronic community I have become friends with: David Borden and Steve Drews, Michael Brückner, Kevin Braheny Fortune, Scott Solter, Boreal Taiga, Jonathan D. Haskell, Klaus Schulze, Brin Coleman, Jack Hertz, Cousin Silas, Win Bent, Daniel Prendiville, Robert Scott Thomson, Holland Holmes, Gareth Whittock, Jack Robertson, Wiliam Edge, etc.....far too many to mention them all. As a community, we share ideas, music, philosophies, techniques, etc. David Borden, for instance, turned me onto Ableton Live - every recording from “Moog Opus No. 1” onward has utilized Live to a large extent - frankly, I credit Ableton Live for allowing me to be as prolific as I’ve become in terms of recording, producing, and releasing my work. That’s just one example of how the ambient family I have created for myself has enriched and inspired me.


7) What is next for what you do?
Recording, releasing new material, doing some concerts, and finally releasing a fourth anthology of my poetry. Though I am reminded of John Lennon’s famous line (from “Beautiful Boy”):

“Life is what happens to you while you’re busy making other plans.”

Regardless of what I do or where I go,I try practicing being centered in the present moment- I haven’t exactly mastered that yet, but it is always dancing in my subconscious. Actually, the times that I achieve that unequivocally are when I sit down to write a piece of music. I am totally in that moment, and immersed in what I’m doing. That’s when I know with absolute certainty what I was put on this Earth to do.

Thanks David! I really do hope we can work together in the future.

David has a Bandcamp page that needs your attention - I've embedded a track for you to have a wee listen. I would ask that you check out his music and, if it's your thing, please support him in his endeavours.


David is also on iTunes - http://itunes.apple.com/us/artist/david-gerard/id115224359 - and SoundCloud - http://soundcloud.com/ambientism ... check him out.
Posted by weareallghosts at 8:00 am