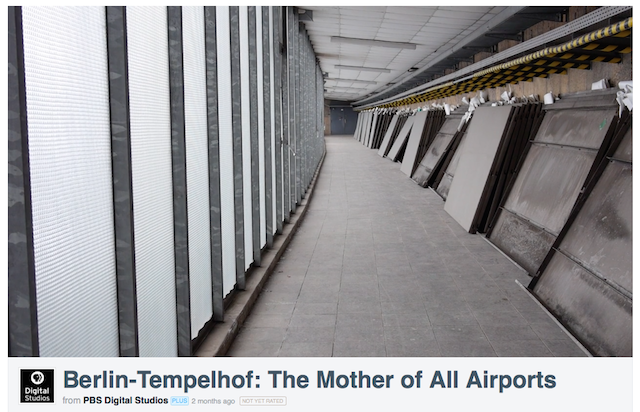 I am currently off work with my second 'secondary infection' resulting from catching whooping cough in December. Currently my movement is restricted due to narrowed airways and asthma-like symptoms ... which means I've been doing a lot of sitting about.

I hate just sitting about. I hate being unproductive ... and whilst I've been reading and listening to music ... I've also been gorging myself on documentaries, travel shows and cookery programmes.

One documentary series that I've enjoyed is from PBS Digital Studios and is entitled 'Unusual Spaces'. It is only 2 episodes deep ... but it is fab.

The first episode looks at the transformation of the Berlin-Tempelhof Airport in Berlin ...


Berlin-Tempelhof: The Mother of All Airports from PBS Digital Studios on Vimeo.

... and the second looks at the movement to reuse an abandoned rail tunnel in Philadelphia and create a public space similar in concept to the High Line in NYC...


The Abandoned Railway below Philadelphia - UNUSUAL SPACES no. 2 from PBS Digital Studios on Vimeo.

I really love these ideas and hope they become a reality. Berlin and Philadelphia are two places I want to visit with Olly. I've been to Philly and would love to take her there. I've never been to Berlin but do think it looks amazing.