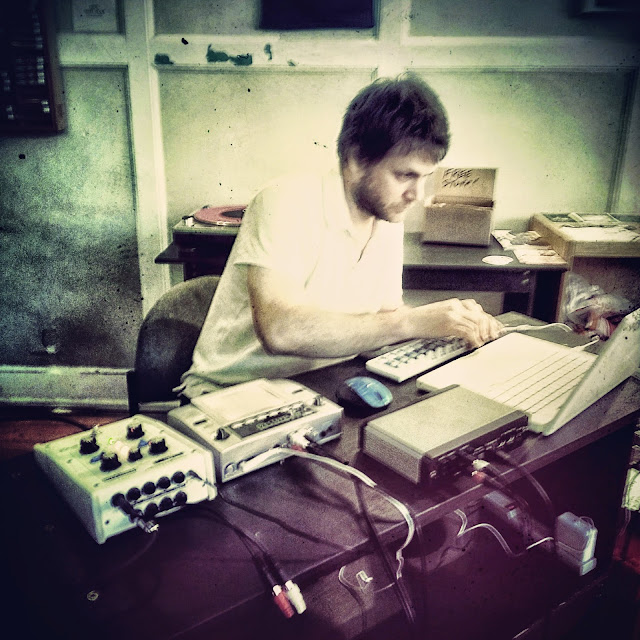 It is a small world. You don't need to be Kevin Bacon to be connected. It turns out that Emily Loren Moss Ferrell, founder of the Subterranean Tide netlabel, is married to the musician Elian aka Michael Duane Ferrell. I don't know any other husband and wife 'teams' in the experimental . ambient community and, being familiar with Elian's music, I took the opportunity and asked if Emily would put in a good word for me ... I'm glad to say she did ... and this is what Michael had to say:

1) Who are you and what do you do?
My name is Michael Duane Ferrell and I record music under the moniker Elian.  I’ve released music for Home Normal, Rural Colours, Richmond Tape Club & some others in the past.  You can stay up to date with my work here:  http://elianmusic.wordpress.com/


2) What are you working on at the moment?
Right now I’m composing material for a new solo album that I hope to put out after the New Year.  I also have a follow up album coming out on Home Normal later this year, hopefully in October.


3) Who inspires you?
- Name an artist who has inspired you.
I’d have to say Ingmar Bergman.  The psychological and surreal natures of his films, as well as their visual and poetic beauty have always been a huge source of inspiration.

- Name place that has inspired you.
As a child, I always loved visiting the Outer Banks of North Carolina.  My family and I now take yearly vacations there in the Summer time.  It always takes me back to childhood.

- Name some "thing" that has inspired you.
Stanley Kubrick’s ‘The Shining’.  I first saw it as a kid and hands down, this film influenced me as an artist more than anything else I can think of.  Mostly it was the haunting score and all that great Ligeti – it shaped my taste for “dark” music at an early age and it’s something that’s always with me.


4) What drives you to do what you do?
Nothing more than a need to be expressive on a personal level.  I’ve always been able to accomplish that with sound better than any other medium.


5) What values do you wish your creativity to express?
The value and importance of individuality.  The value of looking beneath the surface and discovering a world you didn’t know existed.


6) What role does community play in what you do?
I’ve started to realize how the local community is as important as the global, so I’m trying to be more active in the local music scene here in Richmond, Virginia.  The global community is typically only accessible to me online and I hate being on the computer, so I tend to be very bad at global networking.  Having said that, I believe it’s important to be active in whatever community that fosters your voice, so I’m trying hard to be better at this.


7) What is next for what you do?
Hopefully, continue to make and release music that I feel good about while continuing to explore the endless possibilities of sound.  Thanks for giving me the opportunity to speak with you.

Thank you Michael. I totally agree with your sentiment about the local community and wish you well with your new albums.

I've embedded two of Elian's releases - on Home Normal and Rural Colours - please do what you can to support Elian's work.

Posted by weareallghosts at 6:00 pm