Loving... "if it carries on like this we're moving to Morecambe" by the fierce and the dead 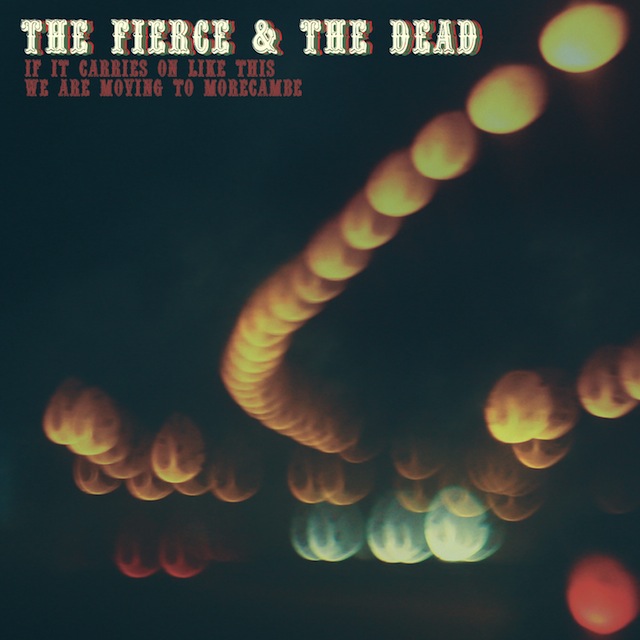 Matt Stevens is an awesome guitarist. Fact. He is also represents a new music business... one in which interaction between the artist and the fan is based on a real relationship.

With this in mind, it was a real honour for me to be given the opportunity to review the fierce and the dead's new album "if it carries on like this we're moving to Morecambe"... an album I have anticipated ever since I heard "part 1".

"Flint" starts of in a cacophony of sound then breaks into a wonderfully vibrant backbeat and some slick guitar playing... before ramping up with a deep, fuzzy bass and some layered chords. What an opener... moving and powerfully persuasive... drawing the listener into the album.

The album then moves to "Part 2" which suggests a continuation from the opus entitled "Part 1" that was released last year. Matt's signature guitar style comes out... underpinned by some seriously rock solid and dependable bass and drums... before going crazy in a moment of bombastic euphoria. The listener is then brought back to earth: the jazz is back and we are lost in the hypnotic swirls of sound that Matt is renowned for.

Next up is "the wait" which begins with a more languid style of layered guitar sound... before bring in funereal keys and a slow, melancholic clapping in the background.

"HR" is piece that drips with anticipation... the chords and percussion build towards a seemingly unknown or unseen destination... joined by the bass before powerful layers of dissonant guitars bring the piece to it's climatic conclusion for the listener.

"Hotel no6" contains some wonderfully haunting ambient drones, found sounds and sustained guitars... which work together synergistically to create an atmosphere reminiscent of an HP Lovecraft short story.

The listener is then jolted into the now with the powerfully fuzzy and frantic "landcrab" with it's intense and incessant punk rock styling. Pow!!!

After the feedback dies away... some crisp bass comes to the front... accompanied by a jazzy backbeat and some equally crisp guitars. As the layers become apparent... the listener is surprised by a wondrously bright and hopeful saxophone solo. I think "daddie's little helper" could be my favourite track as it builds in intensity to for a crescendo of sound before opening up for some more seriously soulful and freeform sax.

"Woodchip" feels different... more closely aligned to the electronic soundscapes of the ambient movement than innovative rock... with wave upon wave of drones... at under 2mins, it is but a taster... some ginger, so to speak, to cleanse the palate before the meaty sustenance of "10x10" is delivered with it's fat backbeat and chunky baseline.

Matt delivers haunting layers of guitar over which he plays his trademark swirling style before building into something stronger and more powerful... with a skittering guitar solo and the ever insistent backing that builds and grows... before dropping into a chasm of subtle piano keys and sustained guitar drones.

This however is just the calm before the storm... with the band bringing their wall of sound back to the delight of the listener.

The last track "Andy Fox" is melancholic in comparison... with sparse piano keys played to the backdrop of droning guitars. The piano is accompanied by some sensitively played bass to set the scene before the drums and guitars break in... creating another intense and cinematic soundscape... with some fabulously slow and funereal saxophone accompaniment... playing that just reeks of emotion and lost.

For me, as a listener, this is one of the best albums I have heard in 2011. The soundscapes are truly magnificent... and credit goes to the band as a whole for their efforts. Whilst this album confirms Matt's status as a truly great guitarist... it also confirms the abilities of Kev Feazey and Stuart Marshall on bass and drums respectively.

My only criticism is that the album is too short. At 38 minutes it leaves me wanting more... and I have taken to including the singles in my playlist to give me more. This is, however, a very slight criticism... because it is very easy to press play and start again on what is a very varied and pleasurable journey.

I am grateful to the band for the opportunity to review their album. I did, however, order my own copy of the, now sold out, initial release of the album... because I believe it to be that good... and because I believe the band to be worthy of my support. I ask you to do the same... with the confidence that you will not be disappointed!

I received my copy today and its going straight into rotation.