Loving... the music of Iskra Strings 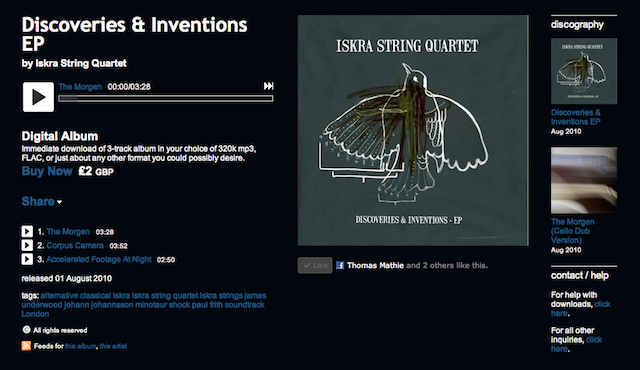 James Underwood is a friend of a friend and a welcome addition to my twitter timeline (@iskrastrings). We have conversed about our shared love of the Icelandic composer Johan Johannsson... and I was impressed that James' group had played with him recently.

I was then doubly impressed when James tweeted a link to a video for a song his group had played on...

I did some digging and found their EP on bandcamp :: Discoveries and Inventions... which I immediately downloaded and have been enjoying. The EP consists of three tracks that were composed by Johan Johannsson, Minotaur Shock and James himself.

Their sound is rich and wonderfully warm... it is engaging with a strong emphasis on tone and melody. Very much a find... and very much welcomed.

With a sound like theirs... I can understand why. I have attached below a few tracks from their soundcloud page... including a track from their EP (Corpus Christi), a Radiohead remix and their rendition of Dvorak's The American Quartet, Lento; to let you hear the breadth of their approach and the richness of their tone.

I hope you enjoy their work as much as I do!

Oh and Iskra means 'a spark' to ignite everything... what a beautiful sentiment and a lasting tribute to the power of creativity.