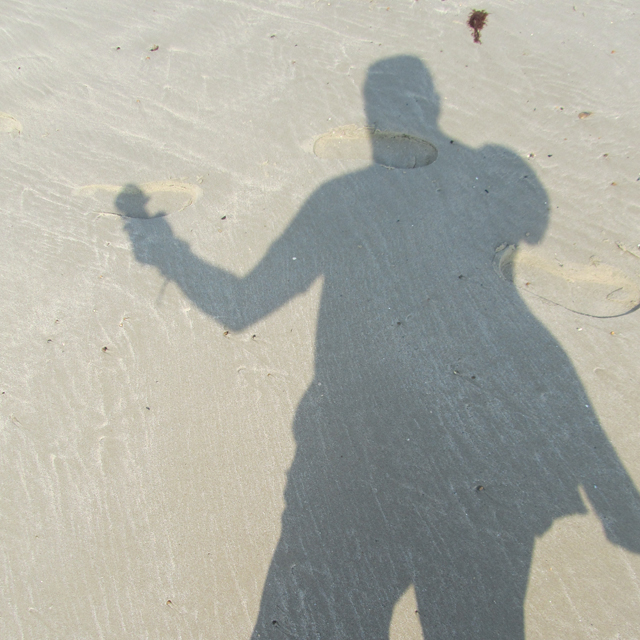 I am a huge fan of James Fahy aka Ambienteer and his elegant and emotive form of ambient electronica. Recently he raised over £750 for the National Autism Society where he generously offered ALL his back catalogue (24 albums in total) in return for a donation. I, along with many others, took him up on his offer.

His music is expressive and layered... with a depth that delights with each and every listen. If ambient electronica is your kind of thing and you don't have Ambienteer in your collection then... well... there is something wrong, imho. Go here and rectify the situation.

Anyway... I caught up with him via email and asked him my seven questions. Enjoy.

1) Who are you and what do you do?
I'm James Fahy, 46 years old and I'm a web administrator/developer during the day and maker of ambient/electronic noises in the late/early hours. I've only been making electronic music in any meaningful way since 2009. I discovered Ableton Live in 2008 and began to realise it was a tool that could really help me to make sounds that would express my thoughts, feelings and emotions. I dabble a little with paint also, both real and virtual.


2) What are you working on at the moment?
Right now, I am trying to sustain my audio blog at ambienteer.com. I went through a manic spell of creativity throughout it's first year of existence, but this has slowed down somewhat and now, if I am lucky, I manage to post something new each week.

Recently, I have been asked to consider playing live, but I am unsure of how to approach this as I haven't archived my original files in any meaningful way. When the blog started it was just a means of expression, I had no need to think of archiving my creative process. One possible solution might be to do something semi improvised, or maybe combine my finished output with another medium of expression.

I'd have to say Brian Eno. Without a doubt. His music and other works are something that I have drawn on, not just for inspiration, but for reflection also. However, it's Talk Talk and Mark Hollis that have had most massive influence on me. Their latter works are incredibly moving. 'Laughing Stock', to me, is a masterpiece. If I could only ever listen to one album, this would be it. I try to make all my work something that stirs the emotions and touches people in some way. I want 'New Grass' to be played at my funeral, it's the most complete piece of music to me.

The work of Mark Rothko is immensely inspiring to me. His art moves me like no other artist. I cannot explain it, but his paintings seem to transport me in some way, from the real world, into a space of spiritual thinking. I met the love of my life for our first date and we sat in the Rothko Room at the Tate Modern for a few hours. This was in late 2007 and I'm convinced that this moment was a trigger for all of the output I have made since.


- Name a place that has inspired you.
I'm in love with a tiny Balearic island, Formentera. It's where I'd like to end my days. I know that, barring some divine/cosmic intervention, it's unlikely, but it's something I'm going to strive for nonetheless. I've watched the sunrise, on the cliff top at La Mola, bathing the island in it's light and warmth, whilst listening to the birds and wildlife, springing into song and activity. It never fails to move me, but it's been a while since I was there last. I must rectify this. ;)


- Name some "thing" that has inspired you.
The strength of the human spirit. Aung San Suu Kyi, is the embodiment of that to me.


4) What drives you to do what you do?
I know that it's down to my partner Nickie and my son Niall. They may not be directly involved in what I do, but they are, without doubt, the driving force behind it. My son is autistic and loves anything visual or artistic, I guess that, in my expressing myself through sound, he can copy that and express himself in his own creative ways.


5) What values do you wish your creativity to express?
There is no agenda to my work. I'm not trying to make any statement as such. I do however want my music to be a support to people. To help them relax, sleep or soothe them in times of stress or anxiety. Ultimately, I'd like to move them in a positive way. Some of my more melancholic work, in my opinion, is the most uplifting.


6) What role does community play in what you do?
I'm a little cut off from the community in truth. I'm a bit awkward socially. That said, social networking has led me to become a little more confident in talking to others, albeit virtually. In fact, I've recently had a few people approach me, citing my pieces as being suitable for various community/educational based projects. It would be wonderful to give my sounds away for use in such a way. I'm hopeful that some of these come to fruition, something I look forward to happening in the not too distant future.


7) What is next for what you do?
As Ambienteer, I guess it's to continue furnishing the blog with little snippets of whatever tumbles out in the early hours. However, I am about to embark on a (slightly delayed) new project called 'Florensky' which is going to be a move away from my current sound. I'll be including beats and will be looking to augment my work with some visual elements. I may sample from my Ambienteer work and use this as a way of moving off the Internet and onto a real stage. I will just have to see how I cope, interacting with real people, in real life! ;)