Thanks to the wonder that is notcot I stumbled upon this fab video... here's the skinny:

36 year old bhilmers of youtube has created a star wars movie intro channeling his inner Saul Bass, using “Machine” by the Buddy Rich Band off the album Big Swing Face (1967)… and it’s pretty sweet for any Saul Bass lovers out there (who’s not?).

I love it... and it kicked off a thought. Who is Saul Bass and why does his style seem familiar?

Saul Bass (May 8, 1920 - April 25, 1996) was a graphic designer and Academy Award-winning filmmaker, but he is best known for his design on animated motion picture title sequences, which is thought of as the best such work ever seen.

He was responsible for the titles to, amongst others, north by north west (where I recognised his style), vertigo and psycho. He also did film posters including, amongst others, west side story... 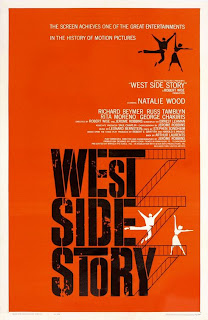 I salute you, Saul, for being a visual genius... and I celebrate your work with one of my fave title sequences... that of VERTIGO:

reminds me of the title sequence to Catch me if You Can. Another great sequence.
http://youtube.com/watch?v=iVEgK3nCkao