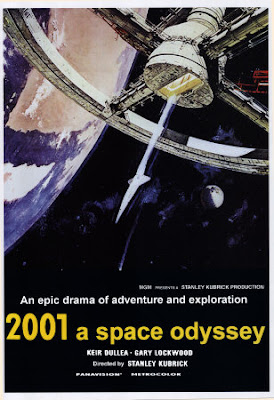 I finally got round to watching 2001 A Space Odyssey. I wont even attempt to define what its all about... ideas of death and rebirth... of travel and limits... just seem small in comparison with the grandeur of this film.

I will, however, rave on about how it is a visual and aural delight.

The cinematographer is simply breathtaking. Unique. Enhanced by a tight attention to detail. The realism of space travel is remarkable - the quiet of space and the effects of gravity are reproduced with startling realism. The design of the sets was also fantastic. You could talk for a long time on the different chairs used or the computer consoles.

The "trip" at the end of the film is as intriguing and beguiling as it is scary and disconcerting... truly a cinematic paradox:

The sound is a wonderful treat too. The ambient noise adds to the experience. The breathing, for example, is extremely disconcerting but amplifies the experience of being in a spacesuit.

The music is a real pleasure out of context (the soundtrack contains some of the best orchestral music ever made)... but... in the context of the film the music enhances the cinematographery and creates a synergistic marriage of beauty and elegance that has no real parallel other than John Williams work with Star Wars.

As an aside... the music, as it appears in the film, is as follows:
Truly a wonderful film in the most holistic of ways. Loved it.

watch the film sunshine if you have a chance. equally compelling cinematography. oh and mogwai's rock action or CODY seems to fit with 2001 perfectly. you can almost turn down the volume and turn up mogwai and it works.