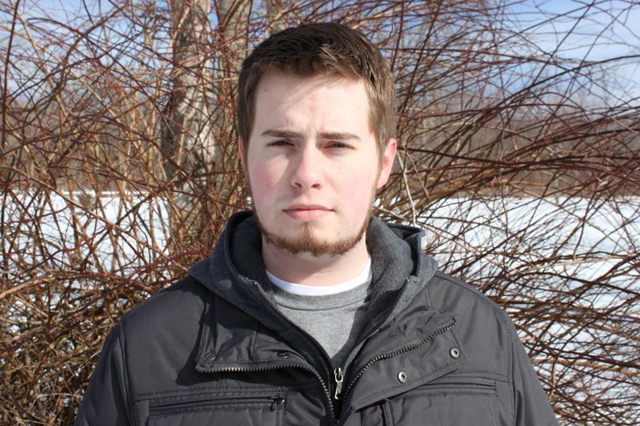 I've been a huge fan of Bryan Collins' work ever since I picked up his rain ep many months ago. His latest album :: who we were :: is my kind of awesome... a beautiful blend of ambient and post-rock soundscapes with an emphasis on the piano rather than the guitar (although there are guitars!!!)... so much so I broke my consumption fast to pick it up and listen to it. Whilst I feel a wee bit guilty... I also feel the delight that comes with hearing music that is so wonderfully me its a joy.

I've been friends with Bryan via Twitter for a wee while and have been following the build up to his album release. I caught up with him after it dropped and asked him my seven questions...

1) Who are you and what do you do?
I'm Bryan Collins, a 22 year old college student who writes piano music under the name Circadian Eyes.

2) What are you working on at the moment?
I just finished my debut full-length album "who we were" and now I'm promoting it across the internet!

3) Who inspires you?
- Name an artist who has inspired you.
I had been tinkering around with the piano for a few years, but it wasn't until I heard Olafur Arnalds that I decided to take it more seriously. He is only a little bit older than me and he writes these beautiful pieces, so I wanted to try something in a similar style.

- Name place that has inspired you.
Most of my music is based around childhood memories so I have taken a lot of my influence from my childhood 'homes' and the experiences I had there.

- Name some "thing" that has inspired you.
I take influence from the simplicity of nature, like open fields, quiet forests, things like that. I like to visualize nature scenes while writing music.


4) What drives you to do what you do?
I am a huge fan of music in general and I wanted to try and create something that I would like to listen to, and that I could express my emotions through. The piano is a very beautiful instrument and I have found that it's the easiest instrument for me to get the emotions in my head into musical form.

5) What values do you wish your creativity to express?
Hope, Nostalgia, a general sense of calm. I'm a very optimistic person and I try to create music that reflects that. I hope that when people listen to my music they can be less stressed, and maybe take their mind to a good place.

6) What role does community play in what you do?
The online community has played a huge role in Circadian Eyes. I released my first EP a little less than a year ago and I didn't really expect too many people to pay attention. But I did the best I could using self-promotion tools and the response I have gotten since then certainly surprised me. Thanks to the internet, the music written in a dorm room in a small town in New York has been heard in several countries around the world, and that still amazes me.

7) What is next for what you do?
Promoting the new album and getting the word out about my music is my main focus right now. I'll be finishing up college in the next few months, so I'll pretty busy doing that. But I'm always writing ideas for new material and I certainly won't stop creating music anytime soon!

Thanks Bryan! Please check out who we were and support truly independent music... it is a beautifully constructed and well thought through album... that is well deserving of the minimum asking price of $3.

Tx
Posted by weareallghosts at 8:41 pm