We are not in control of what people remember... but we are in control how we react! 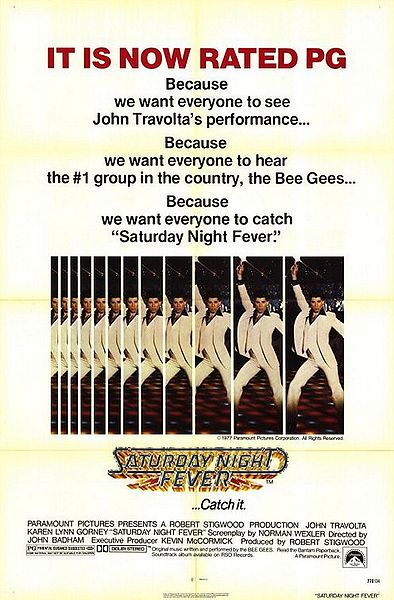 I'm not long back from my we'ans' Easter show at their school. Thoroughly enjoyed it... but something stood out in addition to Dayna's version of "We'll meet again" or Miriam's shadow-boxing to "Eye of the tiger"... a couple of the songs caught my attention.

One of the years sang along to two tracks from the Bee-Gees' soundtrack to Saturday Night Fever: "Night Fever" and "Stayin' Alive".

Now... I love the soundtrack and I'm not criticising the choice in anyway... they are tracks that define the 70s and are miles ahead of ABBA, imho.

As always... the songs got me thinking... what was once controversial becomes bland through the co-opting of the mainstream.


"Two theatrical versions of the film were released: the Original R-rated version and an edited PG-rated version.

The R-rated version released in 1977 represented the movie's first run, and totaled 118 minutes.

After the success of the first run, in 1978 the film was re-issued to a PG-rated version and re-released during a second run to attract a wider audience. The R-rated version contained profanity, nudity, drug use and an attempted rape scene, all of which were de-emphasized or completely removed from the PG version.

The film was watered down to appeal to the mainstream. What was once controversial has now become definitive of a time and place... so much so, Primary School children sing-a-long to tracks from the soundtrack.

I see examples of this all the time... something once powerfully subversive becomes assimilated into the mainstream. I guess this is progress. We become acclimatized or, dare I say, calloused to that which was once shocking.

When you consider the whole hubbub that has surrounded the release of Rob Bell's recent book :: Love Wins :: can I suggest that, through time, this controversy will blow over?

It will blow over because people will actually read it... and the offended will move onto to something or someone else. There is always the next thing... which, in evangelical circles, usually means another book from Brian McLaren.

Or it will blow over because his writing is deemed irrelevant... and, as such, will wither and die... because it lacks meaning and significance to people... failing to connect.

I guess this is why patience is a fruit of Spirit... rather than shooting-from-the-hip... because worth isn't always seen in the moment.

Now... please note... I haven't finished Love Wins and am not in a place to venture an opinion yet... but I will say that I think the subject matter contained within the book will last... because it isn't a new argument... its just been refreshed.

Can I also suggest that the damage left by those who were offended... who reacted in a manner  diametrically opposed to grace and love... will last longer than the content of their opinions or their arguments? The internet isn't archived.

I guess this is where the learning is... whilst opinions change, people move on and the mainstream co-opts... our words now remain... forever... on the internet.

This is why we need patience, grace and love more than anything... we should be known for our love. We should be quick to love... to listen and to understand... and slow to react with anger.

We are not in control of what will last or will be remembered. Can you imagine telling John Badham... back in 1977... that in 2011 his film will be remembered through key songs from his film's soundtrack being sung by Primary School children? He'd have laughed...

We are not in control of what people remember... but we are in control how we act or, more importantly, react at each moment of each day.

Take it seriously! We need to live a life of love... every single day.

Tx
Posted by weareallghosts at 11:00 pm