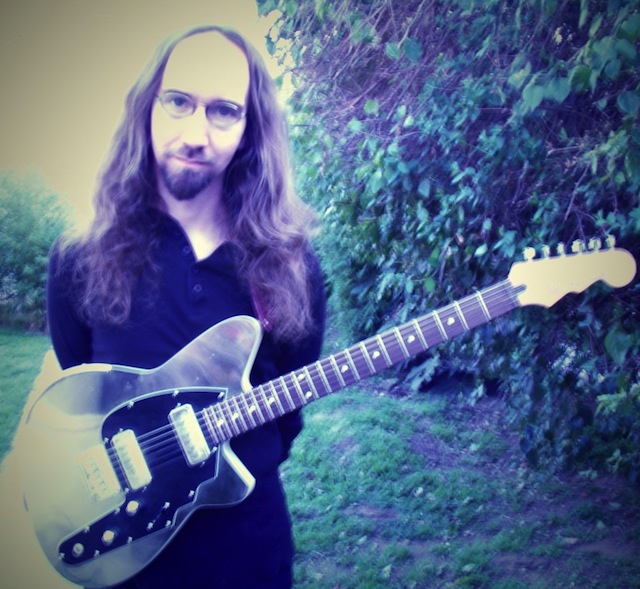 When someone takes the time to send me their music... I will listen to it. More often than not the music and the musician will find themselves on the ol' nanolog.

Case in point is this chap... Andre LaFosse... someone who found my site through my coverage of the fantastic Matt Stevens and his equally fantastic band The Fierce and the Dead. I was honoured... but I was also intrigued because this is how he pitched his music:


I'm afraid that I'm an oddball musician with a couple of strange new releases - one a retro-synth psychedelic hauntology freakout, one a mid-life crisis collection of prog/noise songs - and was wondering if you might have any inclination to review either one on your fine site?

I mean... how could I resist a pitch like that?

Now the two albums LaFosse refers to are mighty fine and I intend to cover them in due course... needless to say they are the breath of guitar-orientated fresh air that I need every-so-often after I get too immersed in ambient soundscapes.

However before I talk about his albums... I thought I would let Mr LaFosse do some speaking. This is what he had to say in response to my wee blog questionnaire:

1) Who are you and what do you do?
Andre Leopold LaFosse, hipster muso deconstructionist solo (tortured) artist. In my secret superhero identity, I make iconoclastic instrumental music. By day, I teach guitar and music classes to innocent, unsuspecting civilians around Los Angeles.


2) What are you working on at the moment?
Recovering from putting out "The Hard Bargain" and "Do The Math".  Trying to remain diligent about spreading the word re. aforementioned albums. Reveling in giving myself permission to work on new music, noodle with synthesizers, play guitar, etc. without having to stress about getting the albums finished. Teaching music.

David Torn. I simply wouldn't do what I do musically without his example and influence. Having had the pleasure of knowing him personally, I can also say he's deeply inspiring and influential as a human being.

California Institute of the Arts, where I studied for three years, and where I got my music degree. It's a small campus perched on a hill, with one primary building housing schools in Art, Dance, Film, Theater, and Music. It totally transformed the way I think about things - not just my music making, but a lot of the ways I look at the world in general.

The Internet. I don't think I would have been willing to start recording and releasing my own music without the possibilities it offers. I've gone through many different phases of involvement with the Internet, not all of them particularly happy or healthy, but it's difficult to think of a "thing" that's had a bigger impact on my music and life.


4) What drives you to do what you do?
Not so long ago I would have cringed at the possibility of saying this, but: I think anyone who "releases" something to be experienced by a potential audience is looking for communication and connection with other people. It's very fashionable to adopt the ivory tower artistic attitude, and say that we don't care what anyone else thinks about our music, and that we do it for ourselves, etc. But as soon as we choose to make a recording available for listening (let alone for purchase), or find a public space to perform in (let alone to charge admission at), we're implicitly inviting, and even asking for, the attention of other people.


5) What values do you wish your creativity to express?
Ooooooh, that's an interesting question. I don't think I'm trying to convey specific values through my music, in the sense of a concrete set of spiritual/cultural/religious/political beliefs. But there's definitely an ongoing tug of war within myself regarding how my own values affect the creation of my work.

On the one side, I try to live with a good deal of humility, and to have that inform the way that I spend my time and deal with people. On the other hand, I'm increasingly aware of the extent to which ego is a prime ingredient in the creative process, and the extent to which anyone who goes to the time and effort to publish or release something publicly clearly has - and, indeed, MUST have - a very high opinion about the importance and value of themselves and their work. And it's not as if I'm thinking, "Hmmm, must cultivate an attitude in order to justify picking up the guitar" - there's a part of me that's hell-bent on generating a dialog through my music, and convinced that I have something important to say.

How much of this comes through the music itself, I don't know - I have some theories about how this stuff has impacted the two new albums, but I kind of want to see what people make of it themselves.

I also tend to feel that, much of the time, creative people may not fully understand what's being expressed through their own music - sometimes, not until many years later. So I'll probably have a much better sense of what my just-released material is "about" after I've got some distance from it, and can come back to it with a (quasi-) objective point of view.


6) What role does community play in what you do?
I've found that the way I think of myself, and perceive the value of what I do, can vary tremendously based on the environment I'm in. Just in the various musical communities I'm a part of, there can be a huge variance in the types of attitudes people have, the way I'm regarded or treated within that community, and how all of this makes me feel. I guess the most obvious ambition would be to surround oneself with like-minded individuals who make us feel good about ourselves, and reinforce the images of ourselves that we want to have…

…except there's a part of me that's a little suspicious of that. For one thing, one of the whole reasons I make albums in the first place is to stir dialogue and debate about certain aspects of music, and I know that there's a part of me that revels in a certain amount of artistic confrontation. Another consideration is that, as reassuring as it can be to have a nurturing, positively reinforcing community, I do feel there's a danger in immersing oneself in an "echo chamber" - an environment where one's own beliefs and values are always reflected and shared by those around oneself.

And I guess I feel like that danger is about insulating ourselves against ideas other than our own, acknowledging the shortcomings of our own knowledge and abilities, and getting a sense of how to connect (artistically, personally, whatever) with people who are coming from a different point of view than ourselves. Indeed, if a creative person is fortunate enough to have their work heard in any significant capacity, they'll inevitably get reactions that are different from what they might have intended, or wanted. (I'd go so far as to say that such a thing is one of the whole points of doing it in the first place.)

So I guess I'm looking for a balance: One the one hand, not getting so comfortable in a community of like-minded people that I get complacent and self-satisfied in my existence as some sort of fundamentally "correct" way of doing things. But on the other hand, not getting too mentally or emotionally invested in an environment where my own values and accomplishments don't hold any relevance, for whatever reason.


7) What is next for what you do?
Making new music! Promoting the current releases. Trying to sequester myself in the metaphorical practice room enough to address some aspects of my guitar playing that are bugging me. Listening - serious, focused listening - to more music, by more artists.

Thanks Andre!!! I've embedded players for both the albums below... take some time out to listen to his retro-synth psychedelic hauntology freakout and mid-life crisis collection of prog/noise songs... and come back soon to read what I thought of both albums.


Posted by weareallghosts at 9:11 pm