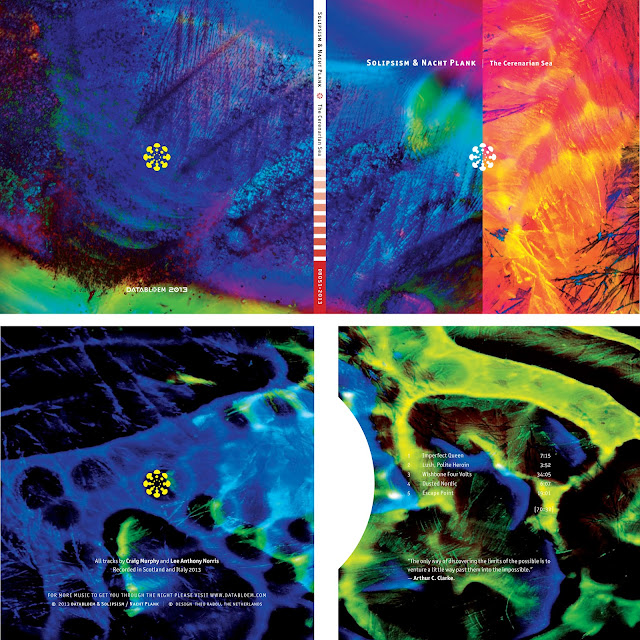 I have a thing for ambient drones. I go to sleep listening to one (or two, if I can't sleep) ... and ... I listen to one whilst working (or two, if its a big piece of work) to aid concentration. I'm a huge fan of this style of musical expression and ... while my netlabel has some wonderful examples to choose from ... I love it when I find a piece from an artist I am unfamiliar with.

Take "The Cerenerian Sea" by Solipsism & Nacht Plank ... a 5-track 71 minute album due to be released on Databloem Records ... an album I was recently given to have a listen to.

This is my kind of ambient ... drone-based but with an emphasis on melody and the imaginative use of noise, glitches, and samples to create and enhance the atmosphere. An atmosphere that isn't quite dark but isn't quite light either ... more a mysterious otherworldy twilight ambience.

The album kicks off with "Imperfect Queen" ... a short-ish drone piece that underpins a delightful melody … a melody that is never drowned out by the noise.

It then moves to "Lush, Polite Heroin" with it's loops of field-recordings that morph into something dissonant yet beguiling. When the melody takes over around the 1:30 mark, the piece takes a decidedly uplifting form which I really enjoyed ... before fading to an almost static buzz. I thought of The Sprawl in William Gibson’s seminal sci-fi classic ’Neuromancer' as I consumed this track ... it has that kind of feel.

We then come face to face with the third track ... the momentous 34 minute opus entitled "Wishbone Four Vaults" which begins with an omnipresent hum before breaking out into some seriously dissonant noise ... a sound, at times, to be endured more than enjoyed ... but one that, if endured, becomes enlightening to those who make it. This is a serious wall-of-sound that does remind of the more frantic elements of nature … like the wind blowing a gale over a body of water. There is something truly elemental about this piece which is a tribute to Solpsism & Nacht Plank's imaginative use of electronics and noise.

The final 2 tracks are far more peaceful ... like the calm *after* the storm. "Dusted Nordic", with its repeated sounds, feels almost hypnotic ... as if I am rising after a long, deep sleep. The underpinning drone vibrates. It forms a subtle melody that warms and comforts ... removing all outside distractions.

The final track - "Escape Point" - is another longform piece ... one that clocks in at 19 minutes. It is bright and airy ... like the breaking of a new day. It is another imaginative piece ... one I found warm and endearing, and definitely in contrast to the dissonant display of power that is the third track. This track balances out the album ... bringing the listener back down after an interesting and varied sonic trip.

I found "The Cerenerian Sea" by Solipsism & Nacht Plank an interesting listen with moments of peace to complement the moments of noise ... the noisier sections may not be to everyone’s taste but I would recommend this release to folks looking for something that, at times, challenges but ultimately rewards the listener.

Posted by weareallghosts at 11:17 pm