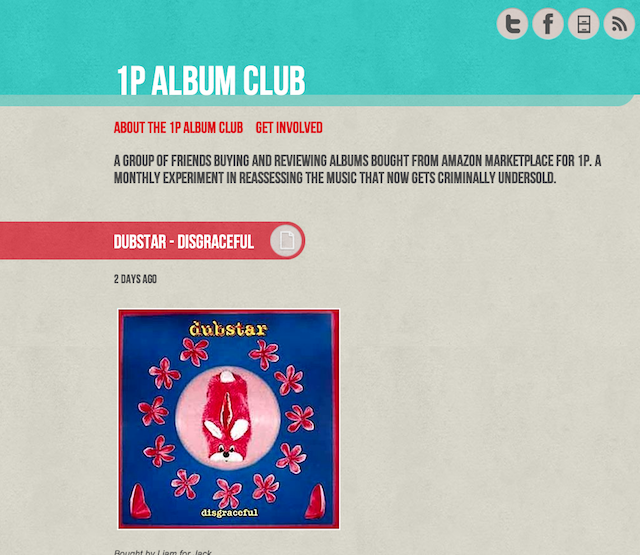 As the name suggests this is a club that is formed around the premise of highlighting criminally undervalued albums that languish for sale on Amazon for 1p. The idea behind it is that you partner up with someone and buy an album for them ... you say why you bought it and your partner talks about what they have received from you.

It is a fab idea that I am delighted to be part of. I anxiously await my first CD from my twitter friendly Richie.

I am excited for a couple of reasons:

We’ll see what happens. Once I receive my first album, I can start looking for one for Richie. It is a great way to build up a friendship and to document the process as we do.

I would highly recommend the 1p Album Club blog ... it makes for a good read ... I tend to reminisce about albums featured that I have or had. In an age where music is easily accessed either through legal or illegal means, it's nice to get back to the physicality of a CD, thoughtful consideration and the greater appreciation of yesteryear. The anticipation alone is worth it ... I love the idea that I don't know what Richie wants me to hear but I will find out soon enough.

I also love the idea that anyone can join the club. All you need is a partner to buy CDs for ... the willingness to be open to new music ... and a love of writing. See the blog for more.

Will keep you posted.

Posted by weareallghosts at 6:47 pm

Email ThisBlogThis!Share to TwitterShare to FacebookShare to Pinterest
Labels: For Your Listening Pleasure, ideas