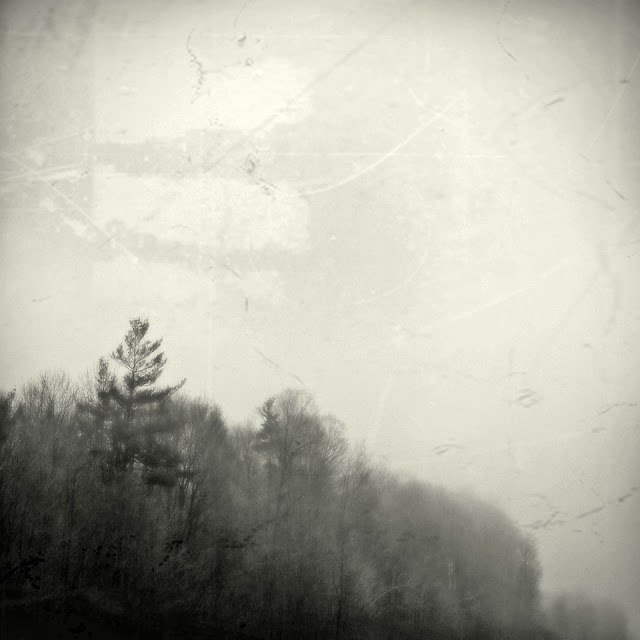 I've been very fortunate of late. Between the music I have purchased and the music I've been sent to check out, there has only been one album that I haven't connected with. North Atlantic Drift aka Brad Deschamps and Mike Abercrombie can relax because it certainly is not their current release “Monuments”.

I've spoke before of the wondrous no-mans-land where the ambient, post-rock, electronic and neo-classical genres meet ... and this is one such release. The tracks on “Monuments” are flavoured with post-rock guitars and electronics in such a manner as to create a deliciously substantial yet distinctly atmospheric soundtrack.

It is in the exemplary use of instrumentation to create such masterful soundscapes and the variety of these tracks that makes this release stand out for me.

The time and effort expended to create these tracks is definitely apparent. They have such depth and have a truly immersive quality about them ... something I can only theorise comes from an almost obsessive attention to detail ... an obsession I believe that has been rewarded. The use of guitars, percussion, synths, electronics, found-sounds, and piano to create these soundscapes points to artists with a real belief in their craft.

What’s more, the variety of the tracks contained within this release is remarkable too. Yes they keep broadly to the no-mans-land I mentioned above but they do vary sufficiently that the passing of one track unto another is acknowledged.

The opening track - “Passing Time” - begins with some percussive found-sounds and gentle chords before developing into the most beautiful of creations ... layers of synths and a fuzzy bass presenting such an idyllic soundscape.

From this place of peace, the album moves to the title track - “Monuments” - a track that builds in that most delightful post-rock kind of way ... layer upon layer of sound bringing the track to the listener’s attention. Around the 2 minute mark the layers dissipate and an electric guitar is left ... bare and naked ... before harmonics and synths come to the fore to accentuate the sheer poetry of the melody being played. Time stops for me in this moment ... only starting again around the 4 minute mark when a stomping rhythm is heard. This marching percussion nicely juxtaposes with the guitar and synths to really make the track ... and what a track it makes ... breathtakingly beautiful.

We then are presented with the third track - “Concrete Oceans” - which begins in a more ambient drone manner before the melody played on an organ comes to the fore. Later on, the organ is complemented with the piano which brings a haunting feel to the track.

Track four - “Sandlab” - plants itself firmly in the listener’s ear with some delightful albeit freaky drones and electronics. These sounds intrigue and captivate as an ominous sense of dread is shaped through the build-up and ultimately the presentation of the track.

Track five - “I have never seen the light” - has a more upbeat feel ... kicking off with gentle, warm synths and a field recording of waves crashing against the shore. This introduction has you yearning of the beach. The track then explodes around the 1:25min mark with piano, percussion and bass ... a deliberate, rhythmic backing introduces then underpins a beautifully upbeat piano-led melody. This track is possibly my favourite. It is so vibrant and alive. It inspires and encourages in the most delightful of ways.

The penultimate track - “Scholars of Time Travel (part II)” -is the longest track on the release ... weighing in at 2 seconds short of 9 minutes. It is a masterpiece of post-rock ambience. It slowly and gently builds in stature ... chords and glitches guiding the listener forward ... immersing them before the keys come in around the 2:45min mark ... followed by beats and synths around the 3:15min mark. The track explodes with colour and vitality like a flower in bloom at this point. It is a marvel to witness. This track is truly cinematic in nature ... it would be perfect as the soundtrack to an High Definition David Attenborough wildlife programme. Truly wonderful and a real highlight.

The closing track - “Sun Dial” - has such a warmth to it ... gentle chords open the track and set the scene ... a scene of hope and anticipation. These chords are slowly supplemented with droning guitar and keys ... a field recording audible in the background. It makes for a fitting end to an amazing release.

Kudos to Brad Deschamps and Mike Abercrombie for composing music of such depth and variety ... you can almost hear the love and obsession that has, I can only presume, been poured into the release’s creation.

I highly recommend this release and would ask you to check it out via the embedded player below. If you are able to, please support independent music by buying the release via Bandcamp.

I look forward to hearing more from North Atlantic Drift in the future.


Posted by weareallghosts at 9:59 pm