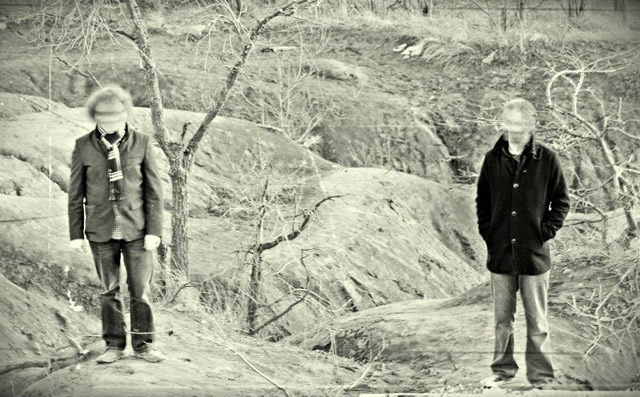 I always love to follow a review with a wee interview with the folks I've reviewed ... I love to know more about them ... get a sense of what makes them tick. Today its the turn of Brad Deschamps ... one half of North Atlantic Drift ... to tell us a wee bit about himself. Enjoy.

1) Who are you and what do you do?
Brad Deschamps, and I am one half of North Atlantic Drift, the other half being Mike Abercrombie.  We’ve been making music together since 2011 and we spend a lot of time in our studio recording weird noises.


2) What are you working on at the moment?
We just released "Monuments" on Sound in Silence Records which we are very excited about!  He’s done some great releases by Good Weather For An Airstrike, Silencio, etc.  We are working on a few things at the moment, namely our next record, titled "Resolven", which we are hoping to release sometime in the summer.  We actually finished recording it last year and it sounds like a natural progression from "Canvas" and "Monuments".  We’ve also started working on an album that is a little more electronic and synth driven than anything else we’ve done so far.


3) Who inspires you?
- Name an artist who has inspired you.
I’m really inspired by Low.  They are one of my absolute favourite bands, their albums Trust, Things We Lost in the Fire and The Great Destroyer in particular are stunning. Composers like Max Richter and Arvo Part are huge influences as well. I’ve also found a lot of inspiration in seeing bands live. I’ve seen Efterklang play several times in Toronto and it’s always really inspiring. Watching them it’s obvious how much they genuinely love creating and performing music, and how appreciative they are that people are listening.

- Name a place that has inspired you.
We both draw inspiration from Toronto, since we both live in the city and experience how overwhelming spending all of your time in a large city can be.  I love the city though, it’s hard to imagine living anywhere else.  We have access to a lot of live music, whether it be local bands or touring artists, which is pretty great - not everyone has that luxury.  I also went to Iceland last year which was incredible and very inspiring.  I’d love to go back and spend even more time there, the landscape is absolutely amazing, plus so many great artists are based there – Johann Johannsson, Sigur Ros, etc!  My friend Ryan Walker visited Iceland last year as well and made a beautiful video featuring one of our songs from an EP we did last year - http://vimeo.com/54471930

- Name some "thing" that has inspired you.
I think we’d both agree that we’ve been pretty inspired by the Strymon Timeline.  It’s been used on a lot of the material we’ve recorded so far.  Strymon are making some unbelievable effects pedals.


4) What drives you to do what you do?
We’re driven by a desire to create music that we really enjoy.  We both spend a lot of time listening to music and talking about music, and want to create something interesting, something that we’re excited about other people hearing!  At the end of the day we both love music and have been composing in various bands for a number of years and I think we are both really excited about the music we’re writing in this project.


5) What values do you wish your creativity to express?
I think the great thing about ambient and experimental music is that it’s fairly open to interpretation.  I do hope people can connect with what we’re doing, whether through the imagery the music evokes or the moods it creates…


6) What role does community play in what you do?
There’s definitely a sense of community among artists making this kind of music, I mean it’s really nice, and really flattering to have a label like Sound in Silence reach out to us and release a record with us when they have put out such great albums!  It’s nice to be involved with other people making and supporting such interesting music. We released our first record on our own label Polar Seas Recordings, we are hoping to expand the label this year and work on releases by other artists that we admire, and reach out to other artists in the ambient and experimental music community.


7) What is next for what you do?
We’ve been discussing the possibility of putting together a live show since thus far this has only been a studio project.  Aside from that, we will be getting "Resolven" mastered and getting that ready for a summer release.  We’re also working on a split album with our friends in Northumbria which should be out sometime in 2013, as well as a film score for my wife (Shaleen Sangha)’s short film "Nayan and the Evil Eye", which we are really looking forward to!

Thank you Brad!  I can't wait to hear "Resolven" ... oh and I second your comment about Low ... they are one great band.