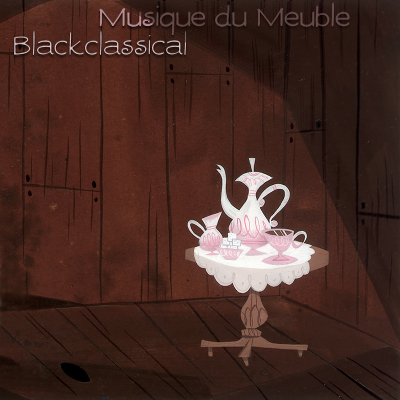 I am on a bit of a piano bender at the moment. The music I have to consider this week all place a considerable degree of emphasis on the piano ... and I love it.

Blackclassical’s album “Musique du Meuble” is billed as a tribute to the life and work of Eric Satie ... and I have found it a wonderfully engaging and intense auditory experience. Now, to be fair, I am not overly familiar with Satie’s work. I say, to my shame, that I only really know 1 or 2 of his “Gymnopédies” and “Gnossiennes” As such, I am not in a position to comment on Blackclassical’s renditions other than to say he has most certainly piqued my interest for the originals ... and his version of Gnossienne #1 (Lent) is very good.

What Blackclassical has created here is a wonderfully engaging soundtrack of piano-orientated pieces that are eloquently sequenced in such a manner to make an utterly delightful ’whole’. Whilst I am unsure whether or not this is a “greatest hits” compilation ... I am convinced by Blackclassical’s exemplary piano technique.

I am especially infatuated with Blackclassical’s use of dynamics. The rise and fall ... the soft and the hard ... quiet and loud ... all masterfully executed. My assumption is that this is an expert reading of Satie’s originals but alas I am unable to confirm this from my personal experience. His ability to capture the boombastic nature of some of these songs without a huge orchestra backing him is testimony to his talent. I am particularly fond of the more boombastic moments ... they have the most delightful power to them ... real movement and influence.

Rather than say any more … I'll let Blackclassic explain


"This release is an exploration of the works of Erik Satie. I have always been humbled by the genius in his work. This collection of work is a personal journey through different moods and emotions that I have felt over the year and through listening to Satie’s music over the years. As such, I have tried to convey this the best that I can using not just piano for which these pieces were intended but using full orchestration too. Heresy probably. Whatever — I think Satie would approve. There will be a Volume II later this year. Thanks for listening."

I would encourage you to download this album *for free* from Pathmusick ... a rather delightful netlabel based in England that is not afraid to release music, like this, on the bleeding edge.