Drafts for iPhone and iPod Touch 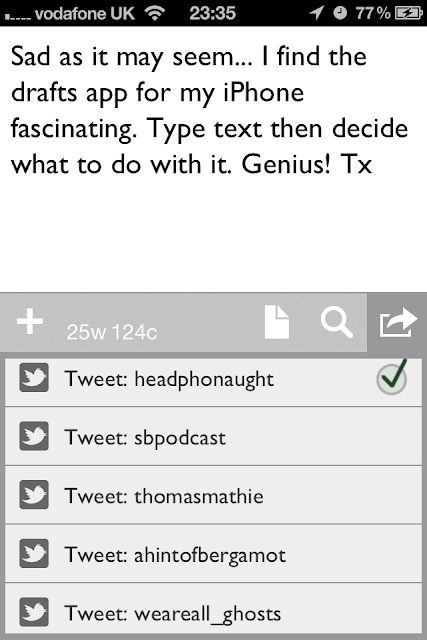 I downloaded this fab app last night that has fascinated me ever since I got it. The app is called "Drafts"... it's from Agile Tortoise... and basically it is a notepad that allows you to send your note to a myriad of different apps... most of which I use.

It connects to Twitter and allows you to send to any of your accounts (see above) - note: it shows the number of words and characters. You can send the note as an email or a text message (see below)... copy it to the Clipboard or send it to "Tweetbot" (I don't use the native Twitter app) or Things. The app finds all the apps you have installed and creates a custom list based on these apps. 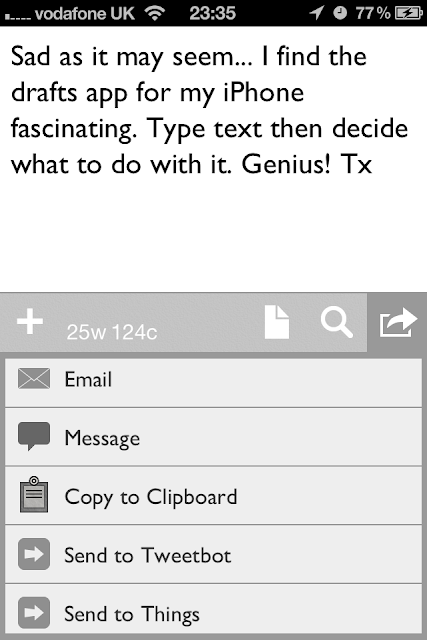 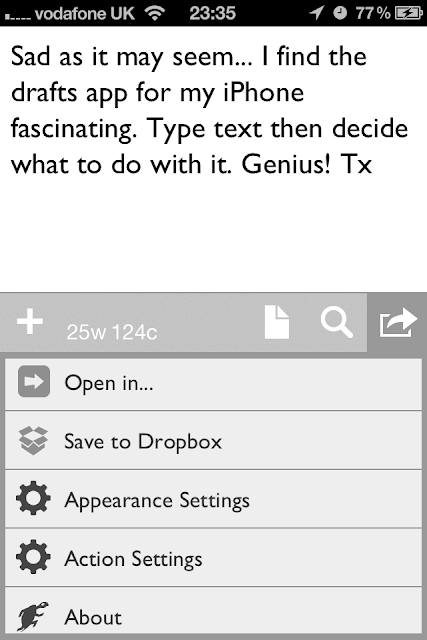 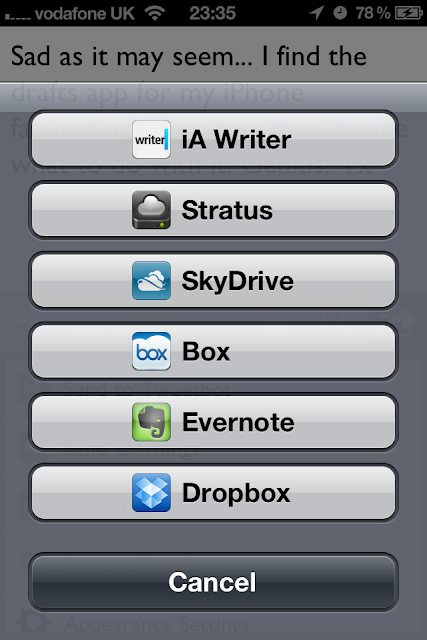 Saving to "Dropbox", for example, was painless... select the option: 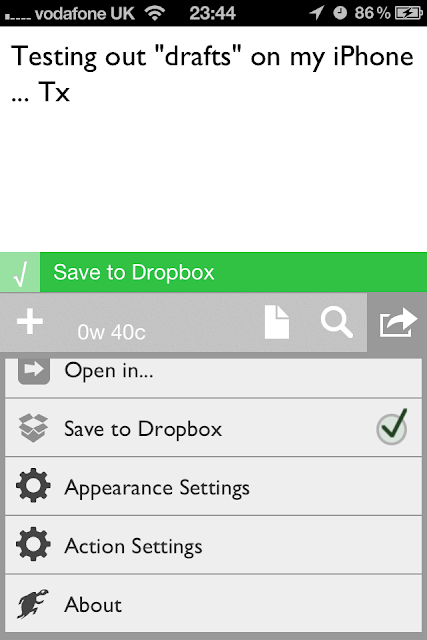 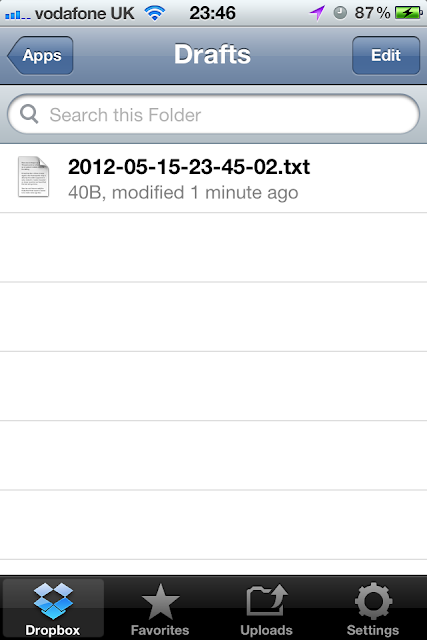 And it appears in a folder called "Drafts" within the "Apps" folder in your "Dropbox".

Saving to "iA Writer" was also very straight forward... select the app from the "Open in..." option: 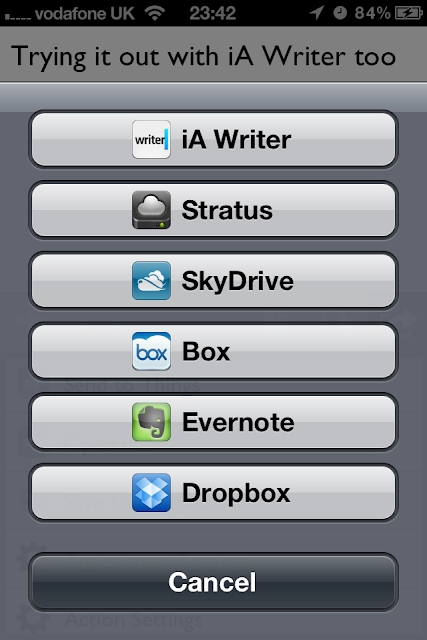 "iA Writer" opens up and a dialogue box appears: 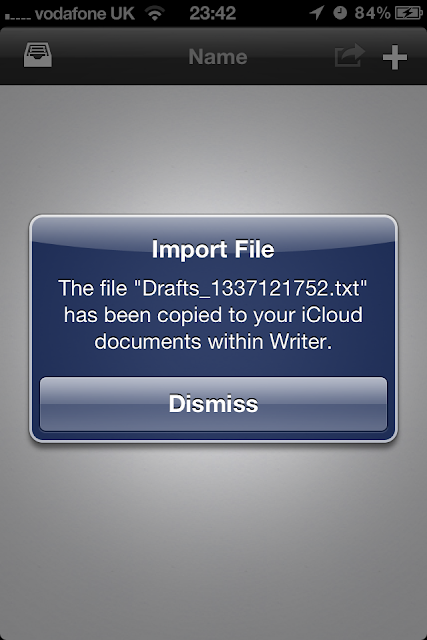 You can then continue to work with the note within "iA Writer": 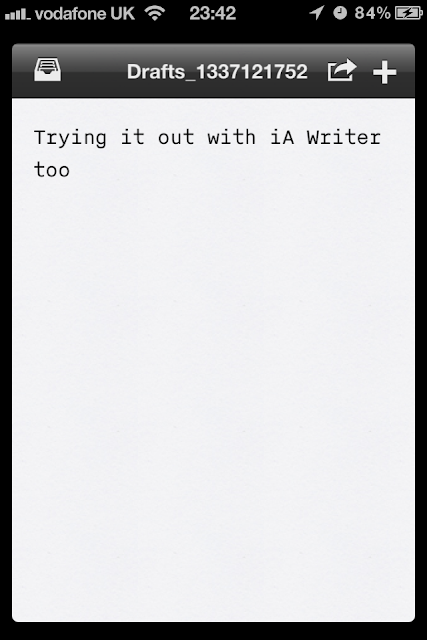 It also works with "Simplenote" but I've stopped using that app because it lacks a Mac client.

The main thing for me... other than Twitter and Text Messaging, however... was the ability to send notes into the 'inbox' within "Things": 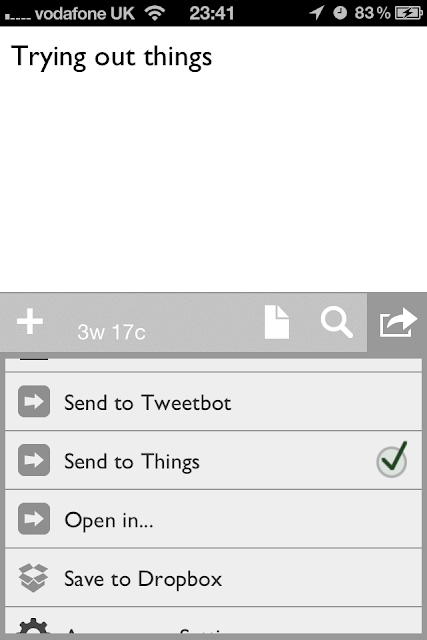 I don't use "Things" enough... mostly because it doesn't have an over-the-air sync for all my devices. That said... the ability to type my thoughts and send them to the 'inbox' for refining really does appeal and takes away the delay in capturing the action. I like that. 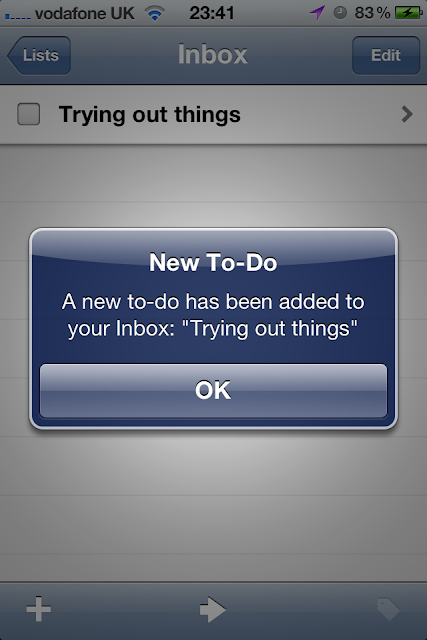 All in... it's a fab app and well worth the 69p I paid for it. I haven't mentioned all the features - it supports 'markdown', for example... but since I don't use them... I can't really talk about them.

That said... "Drafts" is so good... it now has a place on my iPhone's dock. I love how I now only have one place to capture ideas. I also love it's simplicity and it's exemplary execution... I hope Apple buys up the company and incorporates "Drafts" into iOS.

My thanks to @diecast for tipping me off!