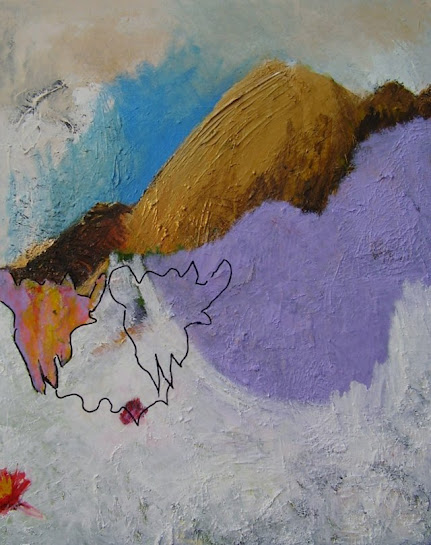 I featured Ade Hodge's artwork earlier and wanted to know a wee bit more about who him and his art... luckily I have a wee blog interview thingy that helps me when such desires for information occur.

1) Who are you and what do you do?
I'm a 49 year old hospital clerk by day, helping to bring in the dosh to support an ailing NHS that Cameron-Clegg plc want to privatise, and a painter, fiction writer and music blogger by night/weekend.


2) What are you working on at the moment?
I've always had a fascination for science-fiction and for 'deep space images' - those beautiful Hubble Telescope type pictures showing vast gaseous clouds and exploding nebulas and the like, so having done a bunch of vaguely surreal landscapes I'm now starting a series of 'in a galaxy far-far away' paintings.


- Name an artist who has inspired you.
Who doesn't? My tastes range from old 'uns like Turner and Velasquez (godfathers of expressionism) to abstract painters like Patrick Heron, and pop art, particularly Peter Blake. I have to say though that I'd cheerfully string up Damien Hirst and Tracey Emin from the nearest lampost given the opportunity, the former for cynically taking the mick and the latter for trivilising art with her self-obsession, and both for giving the middle finger to painting.

- Name place that has inspired you.
Although I'm a Gloucestershire lad, it has to be Cornwall, generally for the rugged landscape and coastline, and St Ives specifically for Tate St Ives - it was so inspired to stick one there, given its arty connections.

- Name some "thing" that has inspired you.
Music - which I listen to constantly whether I'm painting, writing, or blogging - especially that of Cousin Silas, rightful heir to Eno's throne though several shades darker, and the lovely Kate Bush, easily the most imaginative/creative woman in the history of British popular music.


4) What drives you to do what you do?
Bloody-mindedness! I've spent 20 years painting over the same dozen or so canvases and have only recently begun to rationalise the contradiction between the extremes of my artistic tastes - i.e. between figurative and abstract forms. The art world at large has helped with that as anything goes these days (take a look at an American magazine called Juxtapoz) and that's quite a liberating thing. I also have a desire to 'push the envelope' - my own if not art's in general - hence the lack of a recognisable personal style.


5) What values do you wish your creativity to express?
I haven't really considered 'values' when I paint, to be honest. I literally just push paint around the canvas until something takes shape, with a vague idea that it will be a landscape or, at the moment, an everyday scene form outer space! Having said tha, one of my landscapes, 'Eden Under Heavy Manners', has a bit of an 'enviromental apocalypse' thing going on as ecology is something I'm concerned about. Other than that, I just want to paint something I'm happy with.


6) What role does community play in what you do?
Depends on which community. I'm new to promoting my work so I've only recently started developing contacts with people in relation to my painting (I hesitate to call it networking as that sounds a bit cynical), and then only people I have something in common with, such as a fondness for ambient music (see the 'pureambient' group on Facebook) or blogging my art through Tumblr, but it's all a bit hit-and-miss. It's great when people hit the 'like' button or reblog your image but less cool when most of your own family and personal friends won't join your Facebook page (he says, grinning through gritted teeth) but I guess I need to be wary of that many-headed hydra named Ego!


7) What is next for what you do?
I guess I'd like an exhibition, if only to get rid of these bloody canvases for a while, and the odd sale would be nice too. Seriously though, I've always been a fan of album cover art, going back to the days of 12" vinyl when you could really see the cover, so I'd be chuffed if someone wanted to use my paintings for that purpose. A musician in Germany has been in touch about his forthcoming release so I'm hoping that will materialise. Other than that, maybe Saatchi, Tate Modern and MOMA will find a place in their permanent collections for me!

Thanks Ade. I, for one, would love to see an exhibition of your work... preferably with a certain Cousin of ours playing a live set. Now *that* would be awesome!

Oh and I would *love* to work with you on we are all ghosts artwork!

For more info on Ade and his work... go here :: http://flavors.me/ade_unsheep_hodges :: it's where Ade herds all his web places together.

Tx
Posted by weareallghosts at 3:00 pm

Like the sound of getting CS to play live, especially if the gig toured!