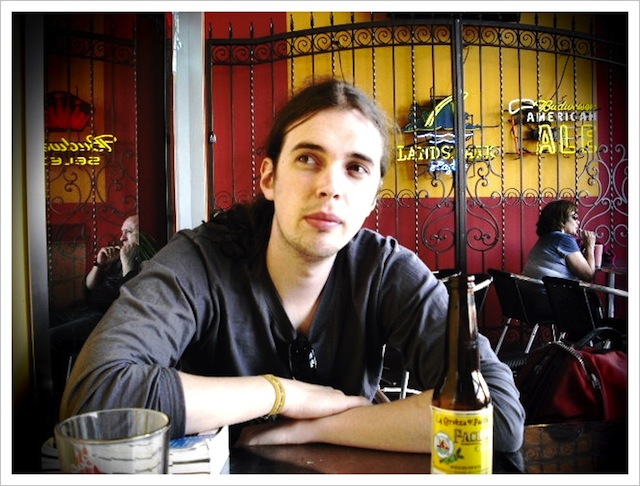 I came across Barry Smethurst aka Apta's music through The Circle Project - Section1: elektronik where he remixed The Eternal Twilight's track "The Child" and, in turn, his track "Like you woke up too late" was remixed by The Echelon Effect. His music is the kind of ambient electronic-infused post-rock that I simply adore.

We got chatting via Twitter and then via email recently after I downloaded one of his earlier albums... he shared a couple of new tracks that he current has up his sleeve (which are fab, btw) and I thought it apt, at that point, to see if he'd answer my wee interview... he was more than happy to oblige... and this is what he had to say:

1) Who are you and what do you do?
I am Barry Smethurst, making music under the name 'Apta', and I do exactly that, as well as eat, sleep, watch poor TV programmes, the usual really.

2) What are you working on at the moment?
Well, as well as the ongoing (permanent) project of trying to get better at the stuff I really care about, i'm working on my first EP. I have only really ever released songs I felt weren't cohesive as a whole, or cohesive, but too short to really give people a reasonable taste of what I'm trying to achieve. I'm hoping to have that completed within the next month, and to have a completed (albeit small) compilation I can be happy with, and try to see if people enjoy. As for my first point, the ongoing goal of trying to get better at something I love will probably never stop, It's something every musician strives for, and even those I consider the pinnacle of their craft are probably striving for more as well.

3) Who inspires you?
- Name an artist who has inspired you.
A huge number of great artists have inspired me to do what I do, I get inspired by new musicians every day, and have a new favourite every week! However, If I had to choose a few musicians that have been instrumental in shaping my sound, and attitude, and ones that I still listen to years down the line they would have to be GY!BE (probably the all-time favourite), The Album Leaf and Keiran Hebden (Four Tet). There are hundreds more that skim through my mind as I list those 3, but they would only be an afterthought, so I'll leave it at that. (Bersarin Quartett - Because it's on the record player now... I had to!)

- Name place that has inspired you.
As I grew up in the countryside, I feel very much influenced by the serenity of open fields, and farms, old houses, barns, getting covered in filthy stuff, that kind of thing. However, in my adult life, I have lived in the city, and that has inspired me in an entirely different way. In Manchester there was ALWAYS a gig that I had heard about and could go to, and pretty much always cool music playing in some bar somewhere. I like the DIY ethic employed in promotion around bigger cities, and the sheer breadth of music on offer to everyone. I think it really makes things seem a lot more possible, and a lot more comfortable for musicians starting out... makes things seem a little less daunting. Not as undaunting as an empty field, but still...

- Name some "thing" that has inspired you.
I have been inspired by everyone I know that encourages me to do what I do. My beautiful girlfriend, loving family, and of course, all the amazing people out there supporting unknown artists, awesome selfless indie labels like Oxide Tones, and fantastic online blogs and magazines that sacrifice trying to appeal to every person possible to give those interested in a certain genres/subgenres an invaluable source to rely upon. It really does surprise me every day the support that people give to you, when you aren't so sure that what you're doing is any good. Everyone needs to improve, but having the confidence to do more is only brought about by those who encourage you, be that critically or in abject praise (The latter, is always nicer ;) )

4) What drives you to do what you do?
I am absolutely driven by the idealistic goal that one day I can make money doing what I love. There really is nothing more to it than that. Isn't that what everyone strives for?

5) What values do you wish your creativity to express?
I have a strong belief that no music should ever be written specifically to please those who are listening to it. To do that (in my opinion) is to sacrifice the creative and emotional force behind the music in the first place. That is not to say the listener isn't important (quite the opposite in fact) I just don't feel that something that doesn't come from your heart can ever reach anyone else's. Does that answer the question?... probably not, in terms of values, I guess that's pride.

6) ) What role does community play in what you do?
As I mentioned before, community is hugely important, If I hadn't had the support of the music-making community, I wouldn't have carried on this far, or I might have but no-one would ever hear it.

7) What is next for what you do?
I'm going to keep playing, and recording music, tinkering with sounds, changing numbers on virtual rectangles and hitting things with other things.... and listening to people doing the same.

Please check out his bandcamp page... and have a wee listen. I've embedded the player of the album I downloaded... to give you a flavour for his music. It's a free download over at bandcamp and one I think is well worth taking the time out to consume: