A reward for my patronage... 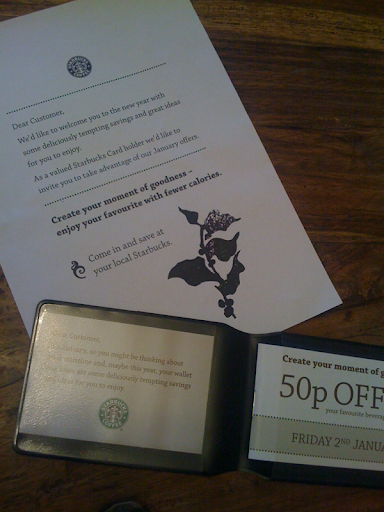 50p off a coffee everyday from Friday, 2nd January to Thursday, 29th January 2009. Sweet!!! Thanks Starbucks... it is appreciated!

Oh and I thought this was interesting...

...Starbucks is a victim of its own success. In the US, at least, its shops alerted people to the possibility if not the reality of excellent coffee. Starbucks did not put neighbourhood shops out of business. Their number increased by 70 per cent between 2000 and 2005.

The Specialty Coffee Association of America reports that in 2006 there were 15,500 independent coffee shops in the US, while Starbucks had 8,800 outlets. Starbucks offered fairly good but not superb coffee, allowing independent stores to concentrate on higher quality.

I like that thought. There is room for the indies as well as the big players.

Posted with LifeCast
Posted by weareallghosts at 1:10 pm

Have a great New Year, bud!