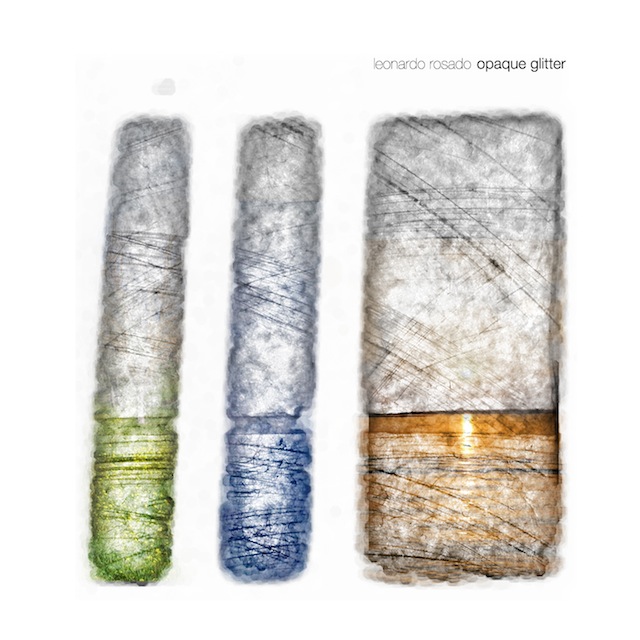 I consider Leonardo Rosado to be a master in the realm of ambient music... I enjoy the soundscapes he creates on a really deep level. It is with this in mind that I approached his latest release... after being kindly given a preview copy to listen to.

"opaque glitter" has a wonderful together-ness about it... the tracks are superbly sequenced to make a wonderful consistent "whole". However, unlike his previous release "for r"... the tracks are shorter. I believe this helps... because no idea is overplayed... leonardo expertly presents his idea, gives it time to live, breathe and be; then moves on to his next idea. I like that.

The album opens with "leaving and staying" which commences with a wonderful "found-sound" percussive motif before delicious post-classical string-like drones bring substance to the track. Over these drones are further found-sounds... sounds like waves crash and chains rattle are brought in such a way as to create a dense and immersive wall-of-sound. It is the combination of the drones and the sounds that make this track so appealing.

Next up is "scratching the surface" that kicks of with a high pitched but wonderfully intriguing drone before further layers of post-classical string-like drones appear... until there is a sense of cacophony. Onto this cacophonous wall-of-sound is the sound of a stringed instrument (or found equivalent) plucking out some notes... and a percussive sound rattling it's idea before being looped into the track. All the time there is the feeling of anticipation as the music builds in size and volume towards a slightly ominous crescendo... before disappearing into the ether.

"amidst the crowd a love story" opens with the sounds of a market... with people coming and going. To this Leonardo adds drones and looped found-sound percussive elements to create a beautifully light and upbeat atmosphere. The market sounds remind me of openair markets in Italia or the small streets of Venezia... busy but it a beautiful way... the beauty of human interaction. This is one track where the genius of Leonardo comes to the front... as he delicately balances all the sounds with a strummed guitar to create such beautiful and meaningful ambience.

"for a moment there" builds a similar picture to the track before with found-sounds like the closing of a door, the crackle of what sounds like Rice Crispies snapping, and the rattle of keys; and field recordings of people talking... playing over dense drones. The melody then kicks in... with a guitar underpinned by what sounds like tabla drums loosely played in the background.

"dancing and falling" begins with layers of dark synth drones... that subtly build in a form of ominous intensity before a slight glitchy pop provides some sense of rhythm. The drones twist and turn through the piece... coming and going in waves... unrelenting in their delightfully dark and almost malicious nature.

"it ends here" starts with what sounds like a howling gale before wonderfully light post-classical drones appear to provide melody and substance to the track. These drones give an ethereal air to the track... a haunting sense of the other-worldly... that is always underpinned by the noise, confusion and chaos that the sound of the wind conveys. It is in this layering of two opposites that the genius of the track becomes evident... especially when a subtle refrain from a synth is heard like a Siren's song... before, near the end, a heartbeat of banging is heard that clears out the wind and scares away the Siren.

The penultimate track "the wind blowing in my face" starts with a distorted drone that reminds me of the wind... before a further drone joins it to bring substance. Glitchy beats bring a meditative quality to the track... drawing the listener in with their repetitive beauty.

The last track "soft like leaves falling" starts of softer and more subtle than previous tracks... layers of drone build over a hauntingly ethereal melody to create a exquisite soundscape. This is then complimented by a sample of what sounds like someone walking on a stoney beach... with the sea crashing in far in the background. This makes for a interesting sound picture... as a traveller walking on the beach is seen in the mind's eye.

Later on... the steps cease and a repetitive burst of sound or banging is heard. This is where Leonardo Rosado displays his genius... by using found-sounds in such a way as to make new and completely unrecognisable sounds from them. These sounds have an intrigue about them that makes them wonderfully desirable... so that when the track, and the album, fades into the ether... the listener is compelled to start from the beginning once more.

"opaque glitter" is a fantastic album. It is both a collection of tracks, each excellent in their own ways, and a cohesive whole, one that demands to be played in its entirety.

I can't fault this recording. The combination of post-classical drones, found-sounds and field recordings is expertly mixed... so that no one element takes over... into a beautiful series of soundscapes... some subtle and some cacophonous and yet all inviting and inclusive.