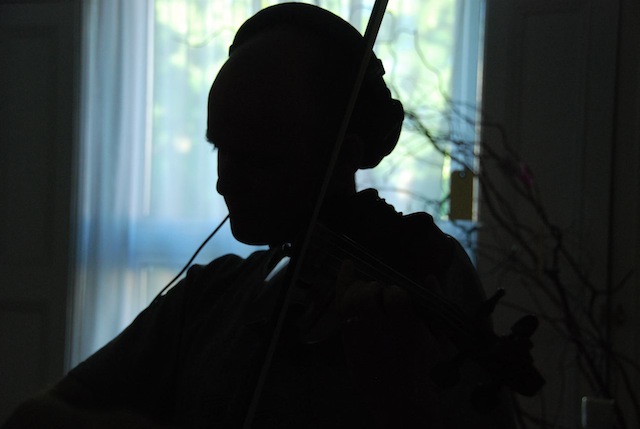 I find the answers I get from the creatives in my timeline totally fascinating... and after featuring the work of Iskra Strings I asked James Underwood if he would be up for answering my wee mini interview... and he jumped at the chance.

Enjoy... oh and check out the extra couple of tracks from their Soundcloud. Awesome.

1. Who are you and what do you do?
I’m James and I am a violinist with a collaborative group of string players called Iskra. We mainly perform as a string quartet but occasionally the name is used as an umbrella for different musical incarnations.


2. What are you working on at the moment?
At this very moment, Iskra are having a short hiatus whilst my family prepare for baby no.2 (due yesterday!). However, we have shows coming up with Ólafur Arnalds and Jóhann Jóhannsson that will need some preparation.

- Name an artist who has inspired you.
We worked with Sufjan Stevens whilst he was promoting his Illinoise album. It’s always amazing to work with one of your favorite artists. He has such a strong musical vision and has so many ideas but he works with genuine humility and generosity. He was very encouraging of everyone else’s creativity in the band and quietly nurtured a strong sense of community. It was a special time.

- Name a place that has inspired you.
London. We live on a housing estate in South West London and sometimes I have a fantasy about moving to the countryside, especially after nights like last night when our neighbours had a drunken fight which ended with them smashing up their windows and the police arriving on the scene. However, that aside, there is an artistic buzz and multiculturalism in the city that is really inspiring and we have worked hard to foster a sense of community where we live.

- Name some "thing" that has inspired you.
I’m nervous about getting too attached to ‘things’ but I’m pretty obsessive about my 200 year-old violin.


4. What drives you to do what you do?
I love music and love playing my violin. I do what I do because of the sheer joy of music making and connecting with other musicians. It’s also always really special if that music connects with an audience however large or small.


5. What values do you wish your creativity to express?
Iskra’s creativity is mostly about interpreting the work of others whilst also managing to express our own voice in a way that serves the music rather than distracts. I hope that we work with generosity, enthusiasm and a sense of adventure.


6. What role does community play in what you do?
Living in London and working as a musician can be a very isolated experience. It’s been important for me to draw together fellow musicians who inspire and encourage one another. It’s also been really important to Iskra (although not always possible) that there is a sense of relationship with the artists we work with.


7) What is next for what you do?
We have contributed strings to forthcoming debut albums from David’s Lyre, Benjamin Francis Leftwich and Marcus Foster. In particular the David’s Lyre (the artist is actually called Paul) album has been a special project as I used to teach him the violin from when he was at primary school. He is now 21 years old, signed to a major record label and doesn’t play the violin anymore.

We are also talking to a composer about performing a new work (it hasn’t actually been written yet) which is for string quartet and a sequencer that will have audio samples taken from the recordings of Donald Crowhurst on his boat during his tragic single handed sailing effort to circumnavigate the globe in 1969.

Lastly, there is talk about the quartet recording an album of library music with another composer friend of ours. It sounds like fun. Watch this space!

Thanks James! Go here for more.