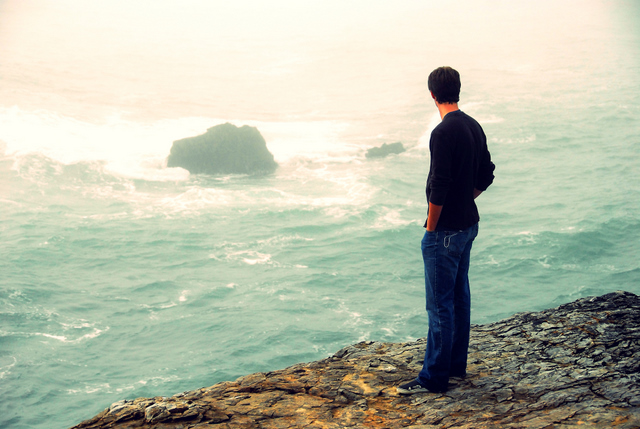 Andy Othling aka Lowercase Noises is a musical inspiration to me. Just over a year ago... I posted on his album :: Marshall ...


I found this album to be particularly moving... especially the last track - "how deep the father's love" - which is a favourite hymn of mine... and is wonderfully yet faithfully reimagined. To come at the end is so climatic ... it had me in tears... and then had me playing it on repeat.

Nothing has changed... other than I now have four albums and an EP to cherish. In fact, his fourth album :: Carry Us All Away :: was the first physical copy of an album I bought on bandcamp... it marks a real, fundamental change in the way I purchase music.

I can't express how his music moves me... I connect to it on a really deep and emotional level... and I am very grateful to him for making it.

Anyway... I caught up with Andy and asked him my wee mini interview. This is what he replied...

1) Who are you and what do you do?
My name is Andy Othling and I am the guy behind Lowercase Noises. I play guitar and pretend to play a few other instruments.


2) What are you working on at the moment?
Right now I’m in the beginning phases of writing and recording an album for my daughter Vivian, who is due to be born on September 1. Which is coming up really fast. Also I’m doing a little collaboration with Josh of Abraham The Poor. We’re hoping to come up with a few good songs and put out an EP at some point.

- Name an artist who has inspired you.
Dredg was the first band that really started to steer me toward the sound that I’m going for now. Particularly the guitar tone… it was so huge and I was/am completely addicted to it. There was also a depth and meaning to the music that I’d not previously experienced. Hammock has also been a huge influence for me in terms of style and sound.

- Name place that has inspired you.
The northern coast of California… and all of Highway 1 really. It’s the only place I get cravings for. I have to go back every summer.

- Name some "thing" that has inspired you.
For some reason water in it’s various forms has always inspired me. I love showers. I love how beautiful and completely horrifying the ocean is. I love rain, and I love rivers. When I was little one of the only things my parents could do to get me to calm down was to set me in the bathroom with the shower running. I guess it’s pretty ironic that I live in the desert.


4) What drives you to do what you do?
I honestly don’t have a great answer to this question. I have to express myself creatively or I start to feel all bottled up or broken or something. I don’t know quite what it is, but not making music is just not an option for me. Sometimes I wish I could turn that drive off, because it’s so hard to create, and so draining and frustrating at times. But of course it’s wonderful.


5) What values do you wish your creativity to express?
I guess there are a couple of aspects to this. I am the type of person who gets drained by being around people and by being in social situations. I get my energy by being alone. So I think a lot of what I try to express through my music is related to that. I want to give people the opportunity to slow down. I want to give people a little bit of space and silence. Because I need those things, and that’s just kind of what comes out when I write. Also, as a Christian I really have a general desire to create music that is thoughtful, quality, and creative as a response to the way the vast majority of “Christian” music has abandoned those values.


6) What role does community play in what you do?
This is kind of a hard question, because I could say that it almost plays no part. Lowercase Noises is mostly a one-man thing (with the exception of a few guest musicians here and there) and it’s what I do as sort of a retreat or escape. But that’s not really true because every artist wants to see their work affect other people in one way or another. So in that sense it makes up a huge part. Knowing that what you do affects even one person is that last thing that happens to make an artist’s work complete. I’ve had people take the time to email me just to say that my music has helped them through some really hard times, and that’s amazing. That’s when I feel the most satisfied about this whole thing. I’m also blown away by the general response from everyone on Facebook, Twitter, etc. I never thought people would be as interested in this as they seem to be.


7) What is next for what you do?
Well like I mentioned before, I’ve really got to get working on these new songs for Vivian. But other than that I’m working on a few things to try to get my name out there and branch out in terms of musical opportunities. I really do want to do music full time in some capacity, and I just want to put myself out there and see what happens.

Thanks Andy! If you don't have some Lowercase Noises in your collection then, in my opinion, you are missing out. You really can't go wrong with his sound.