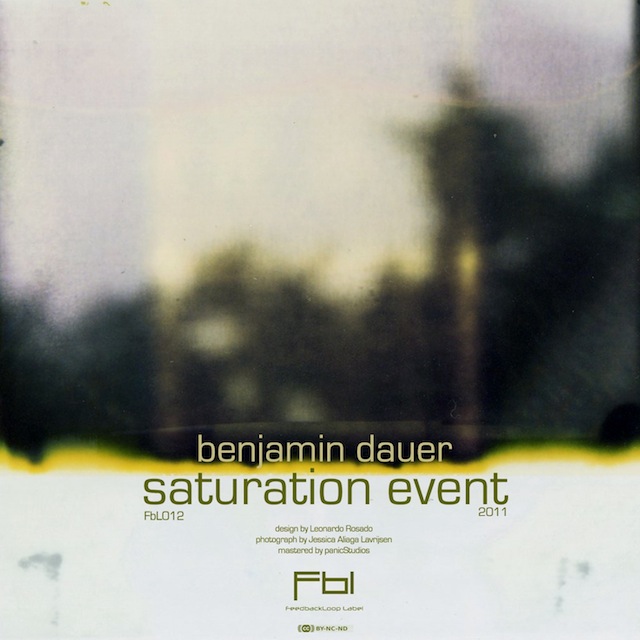 I was grateful to Leonardo over at the awesome netlabel Feedback Loop for giving me the opportunity to preview his latest release :: Saturation Event :: and, in doing so, introducing me to Benjamin Dauer and his art.

I love ambient music and I think Benjamin Dauer's is truly wonderful. Let me explain why...

Saturation Event opens with the ominous and imposing darkness of "borderland of sleep" ... which is a real aural treat with ambient drones that come in and out of perception like waves on the sea... coming closer and closer then fading away... only to repeat this pattern in a truly delightful yet unsettling manner.

We then have "falling apart i" which initially carries on the deeply ominous feel... but brings in an engaging and immersive layer of sound that has a brighter and more hopeful countenance.

The third track "alistrati" is a truly wonderful and impressive sound picture where glitchy percussive elements are added to the droning soundscape. These elements provide a sense of organic randomness that allow me, as the listener, to feel like I am in a tunnel or cavern... getting wet with drips of water.

We then are presented with "crown of sparks" which opens with luscious post-classical drones that build to create an immersive wall-of-sound before fading away in an ebb before flowing back almost immediately. This track stands out as more melodic and engaging that those that came before... yet it fits beautifully into the 'whole' of the album.

Continuing this post-classical theme is "orbits in conversation" which has a brightness and airiness to it. I picture a return to the surface after a period below ground... there is a freshness about this track that suggests the deep filling of the lungs with clean air.

The penultimate track "falling apart ii" regains some of the mystery of the earlier tracks... there is a sense of looking back to where the listener has been but without the overwhelming feeling of ominousness. There is movement and a sense of larger-than-life spaciousness here... an openness of sound and texture that brings relief and awe in equal measure.

The last track "transient pool" concludes the album eloquently with further waves of sound before brighter themes are introduced... an immersive sense of sparkling and shining as it attracts the eye... all the while the soft, lilting waves gently ebb and flow... eventually bringing the track and the album to a natural close.

This is a deeply impressive album that showcases the power and majesty of post-classical ambient electronic music. It is a delight to feature it on this blog and to have it in my collection.

It is also a delight to welcome into my awareness Benjamin Dauer... I look forward to following his career and hearing more awesome soundscapes like Saturation Event which is available for free on Feedback Loop.

Tx
Posted by weareallghosts at 10:27 pm