Seven questions... with Matt & Kev from The Fierce And The Dead 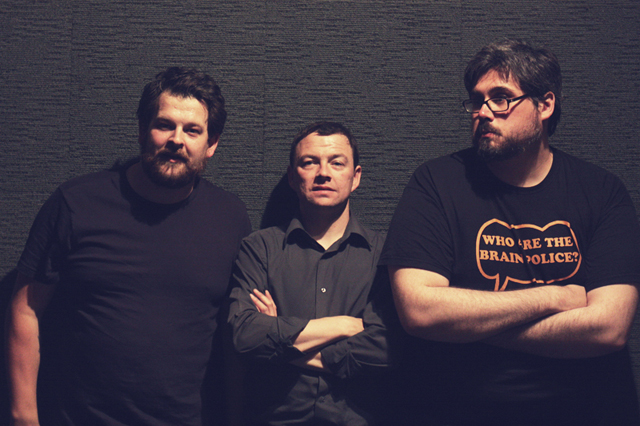 Now then... Mr Matt Stevens is a cheeky monkey because he's sneaked in a second interview... but because its under the guise of his band :: The Fierce And The Dead :: I'll let him off.

In all seriousness... their debut album :: "If It Carries On Like This We Are Moving To Morecambe" :: is one of my fave albums so far this year with its wonderful mix of progressive instrumental post-rock. I was very fortunate to get a preview listen (review here) and was blown away. I really want them to succeed and with over 1,000 albums sold to date, they are on their way.

I caught up with Matt (right) and Kev (left... whose bass playing seriously impresses me) over email and asked them my seven questions... this is what they said:


Kev: I'm Kevin Feazey. I play bass in The Fierce And The Dead and i'm an audio engineer and producer. I also play bass for The Murder Barn and Ten Times The Man You'll Ever Be.

Matt: I'm Matt Stevens and I play guitar and make funny noises in The Fierce and The Dead. I also play in Yonks which is more esoteric and do solo stuff. And I run the Spencer Park Music label thing. And other stuff.


K: I am working on recordings for a band called Silvery and writing new material for TFATD.

M: I'm finishing my 3rd solo record, doing solo gigs and there is more Yonks stuff on the way. I wrote a new TFATD song today. We're doing some The Fierce And The Dead gigs soon as well. And I'm spending too much time on Twitter, need to stop that


K: Black Flag. Their dedication to the music makes most other bands look like hobbyists.

M: My old guitar teacher Richard Beaumont was a big influence on me. He was a very unusual musician and he taught me a lot of the jazzy harmony parts that I use in the music, as well as the odd timings and all that. Lovely fella as well. The Track HR on the Fierce And The Dead record with the ascending chords and inversions has a feel influenced by him.


K: The Oakley Arms in my hometown. It's where my ambitions first became focused.

M: Home. My house with my wife! Seriously having her support allows me to do what i do with the music.

M: Twitter and the friendships I've made online are inspiring. When I was making music a few years ago there was no feedback, it was like shouting into space. Now you can put music out and get feedback and all that, you don't have to listen to it if you don't want to! Its a great to have that audience.

M: I just want to get stuff finished, to produce good work. I've always wanted to do music thats different and individual, to hear new sounds, to try new things. Thats all you can do. I'm really proud of the Fierce And The Dead album, I think its a progression from the EP and different to the other things I've worked on. Kev and Stu are are great musicians, we have a very intuitive musical relationship where we play stuff and no one is trying to show off, I'm proud of that. I'll feel a lot happier when the my third solo album is out as well and all the backlog of music from the last year is clear.

M: Honesty really. All you can do is be honest, if you try and be cool or try and do music people will like you've had it. Be totally honest in what you do, the audience can see through it if you don't. If you don't have integrity you have nothing. I do it because I love music.

K: I would hate for the music I play to preach values. If anything I want our music to encourage people to develop their own values independently.

M: The online community have supported us financially and by spreading the word and allowed us to do this so its absolutely crucial. Without them the album wouldn't exist. The reaction to the album has been really motivational to keep the project going.

K: My family is my base and my friends are my family.

M: A new vinyl EP next year and lots and lots of gigs. We'll see how far we can take the Fierce and The Dead, I'm not stopping the solo stuff at this stage and there are various other projects but I'd really like people to hear the FATD stuff. I'm so happy with the reaction we've had so far, its a small audience but they are really into it. Thats all you can ask for really. We're very lucky and I'm totally aware of that. People buying the music allows us to keep doing this and record at decent studios and all that.

K: We are lucky enough to be able to play our music without having to pander to outside influences. I want to keep doing that for as long as we can.

Thanks guys... very insightful. I look forward to more from you both.