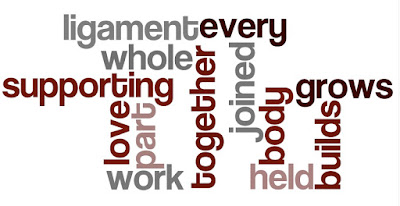 I have been meditating on the following passage from Ephesians 4:1-16 ::

As a prisoner for the Lord, then, I urge you to live a life worthy of the calling you have received. Be completely humble and gentle; be patient, bearing with one another in love. Make every effort to keep the unity of the Spirit through the bond of peace. There is one body and one Spirit—just as you were called to one hope when you were called— one Lord, one faith, one baptism; one God and Father of all, who is over all and through all and in all.

But to each one of us grace has been given as Christ apportioned it. This is why it says:

"When he ascended on high, he led captives in his train and gave gifts to men."

(What does "he ascended" mean except that he also descended to the lower, earthly regions? He who descended is the very one who ascended higher than all the heavens, in order to fill the whole universe.) It was he who gave some to be apostles, some to be prophets, some to be evangelists, and some to be pastors and teachers, to prepare God's people for works of service, so that the body of Christ may be built up until we all reach unity in the faith and in the knowledge of the Son of God and become mature, attaining to the whole measure of the fullness of Christ.

Then we will no longer be infants, tossed back and forth by the waves, and blown here and there by every wind of teaching and by the cunning and craftiness of men in their deceitful scheming. Instead, speaking the truth in love, we will in all things grow up into him who is the Head, that is, Christ. From him the whole body, joined and held together by every supporting ligament, grows and builds itself up in love, as each part does its work.

I've been meditating on it since I began reading chapter 10 of Michael Frost and Alan Hirsch's book :: The shaping of things to come (yes... I am still reading this book!!!)

In chapter 10 they propose a Scriptural method for leadership... based on the giftings of apostles, prophets, evangelists, pastors and teachers ::

This has made me think that what the church as in the Body of Christ needs right now... more than anything... is unity and NOT uniformity in the Spirit.

Let me explain my thoughts here... there is nothing I dislike more than to be told what I should or shouldn't think/do because I am a Christian. Facebook friends around the end of October last year will know what I mean. I react very strongly AGAINST people who start conversations with the phrase.

I believe wholeheartedly in the "ones" in this passage:
This is unity... but this doesn't demand uniformity. The very passage speaks of having different giftings... we are gifted with different things so that we can make a stronger WHOLE than the SUM OF OUR PARTS.

We are all different. We all have different experiences... different baggage... different tastes and preferences and worldviews. This diversity makes the collective whole stronger.

When we stand alone... we are incomplete. When we stand together... we become who we should be... or at least we are closer to realising this.

Denominations work because of the very diversity you could argue they seek to control. You go where it works for you... but, in doing so, you must realise that there are more than carrots in the salad bowl.

A salad is not one thing... a carrot doesn't make a salad. Tomatoes, carrot, lettuce, cucumber, cabbage, rocket... etc... make up a salad. Its not about uniformity. Its about unity in our diversity.

Look at the body... there is nothing more diverse and yet unified than a human body... and it is the analogy used within the Bible for the church.

The term doesn't just mean "right wing Republican"... it can and does mean "left wing Liberal" too.

The term doesn't just mean "homophobic & racist"... it can and does mean "accepting & compassionate to others" too.

Just because I am a follower of Christ does not mean I will do certain things and refrain from doing other things. There isn't a new Law! That said... I am not advocating a hypocritical life. You cannot serve two masters... no one can.

Let's not negatively focus on what divides us... be it our gender or our sexuality... be it our social status or where we call home... be it our political convictions or our record collections... but positively consider these elements as being the things that shape us.

Let's move from the desire for uniformity in all things and instead... let's focus on unity... if we believe in "the ones"... then let's come together... let's look beyond our boxes and focus on God and His mission here on Earth. I think we need to... if we wish to grow up!

Posted by weareallghosts at 11:36 pm

I agree with you Thomas.The Lord's standard for us is quite plainly that we love one another as He loves us.

Amen- said the carrot....to the potato.

how do we reconstruct all your ideas?

This is a comment I posted on Theresa Seeber's blog (http://thedesertrose.wordpress.com/2009/01/11/community)

I think strive is the word… its something we all should work at. It doesn’t always just happen… we need to INTENTIONALLY seek towards unity through love. Take the 2nd and 3rd verses of Ephesians 6 as our starter ::

Be completely humble and gentle; be patient, bearing with one another in love. Make every effort to keep the unity of the Spirit through the bond of peace.

We need to be humble, gentle, patient and, above all, loving. Let go of the injustices that poison us… and let go of the wrongs done to us… and be reconciled, in love.

We don’t need to agree on everything… diversity isn’t about agreeing with each other on everything… but it has EVERYTHING to do with respecting the position of the other person.

Uniformity is where everyone believes the same / looks / acts / lives the same.

Unity is where we come together as different people and seek to stick together because of something… in the case of Ephesians 4… the ones:

* one body
* one Spirit
* one hope
* one Lord
* one faith
* one baptism
* one God and Father of all… who is over all and through all and in all.

We can disagree on all the other stuff… as long as we believe the stuff that matters!

End of the day, its through love that we make this change.

Hopefully this makes sense… I’m off to bed.

I think this goes back to we need spaces of grace.

We need places where we're willing to lay aside our labels in an effort to build unity. While we can still maintain those labels and flavors, we shouldn't judge each other by them.

If you have a different view on end times than me - so be it.

Do you believe that Jesus is God's Son come to bring about the redemption of the world? Excellent! Let's go from there.

You are all children of God through faith in Christ Jesus, for all of you who were baptized into Christ have clothed yourselves with Christ. There is neither high church nor low church, Fox nor CNN, citizen nor alien, capitalist nor communist, gay nor straight, beautiful nor ugly, East nor West, theist nor atheist, Israel nor Palestine, hawk nor dove, American nor Iraqi, married nor divorced, uptown nor downtown, terrorist nor freedom fighter, paedophile nor loving parent, priest nor prophet, fame nor obscurity, Christian nor non-Christian, for all are made one in Christ Jesus.

"Let me give you a new command: Love one another. In the same way I loved you, you love one another. This is how everyone will recognize that you are my disciples—when they see the love you have for each other."

"I'm praying not only for them
But also for those who will believe in me
Because of them and their witness about me.
The goal is for all of them to become one heart and mind—
Just as you, Father, are in me and I in you,
So they might be one heart and mind with us.
Then the world might believe that you, in fact, sent me.
The same glory you gave me, I gave them,
So they'll be as unified and together as we are—
I in them and you in me.
Then they'll be mature in this oneness,
And give the godless world evidence
That you've sent me and loved them
In the same way you've loved me."

Completely agree JD... except I'm more of a BBC News kind of guy instead of FOX / CNN :-)