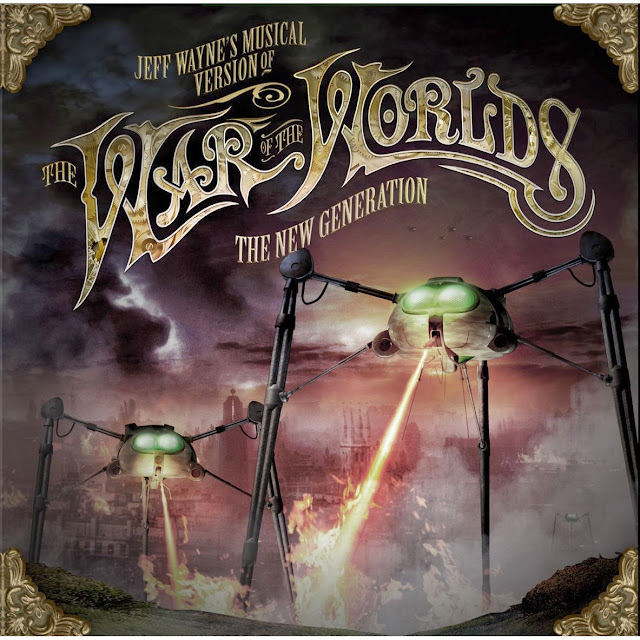 I'm not a big fan of the term "guilty pleasure" ... you either like something or you don't ... but the term does seem appropriate for music, in particular Jeff Wayne's musical version of The War of the Worlds.

I'm not an avid musical fan ... it's not really my thing, especially Lloyd-Webber's nonsense ... but even I have a few faves such as "The Sound of Music", "Wicked", and "The War of the Worlds".

I recently discovered that Jeff Wayne's classic had been redone for a new generation ... and downloaded it almost instantly for £1.99 on Amazon. It features Liam Neeson as The Journalist in place of Richard Burton ... with Gary Barlow, Ricky Wilson, and Joss Stone taking roles ... along with a few others whose names I don't recognise.

Do I prefer it to the original? Yes and no ... Liam Neeson could read the Telephone Directory to me and I'd love it ... and Gary Barlow is someone I rate as a singer ... but then Ricky Wilson's voice does grate on me after a while ... and I preferred Phil Lynott as The Parson instead of Maverick Sabre. The music is tastefully updated, keeping the original intense symphonic spirit intact ... it still sounds wonderfully progressive even after the update.

I guess everyone has a guilty pleasure and this is one of mine ... the update works for me and at £1.99 I couldn't say no.

Jeff Wayne's musical version of The War of the Worlds

Tx
Posted by weareallghosts at 6:40 pm