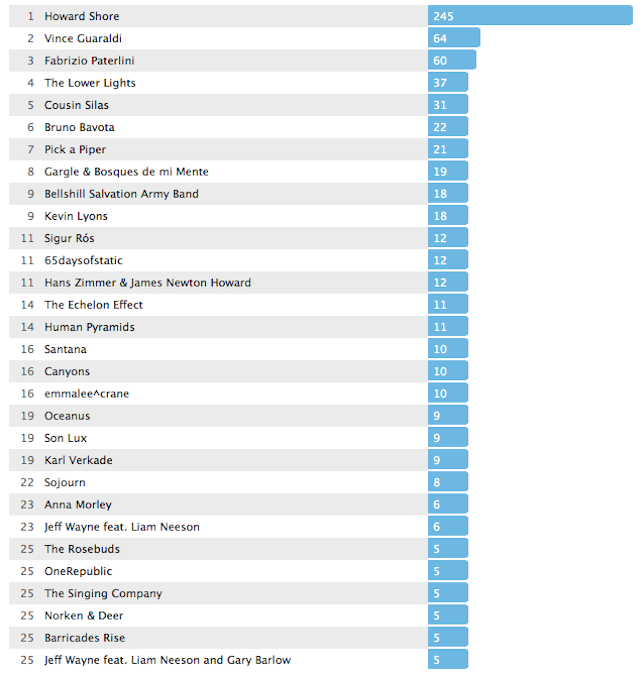 As always, these numbers miss out all the music I listened to on vinyl ... but with that in mind ... December's stats will always be skewed by Christmas music ... as can be seen by the references to Vince Guaraldi, The Lower Lights, Bellshill Salvation Army Band, Sojourn, The Singing Company, and Barricades Rise.

The stats are also skewed by the naming convention of Jeff Wayne's The War of the Worlds (New Generation) ... there are two distinct references to Jeff Wayne but these are for the same album. I will fix this.

This was a month where Howard Shore kind of took over ... with the soundtrack to "The Desolation of Smaug" getting a lot of play. However, there were great moments from Cousin Silas, Kevin Lyons, Bruno Bavota & Fabrizio Paterlini too. 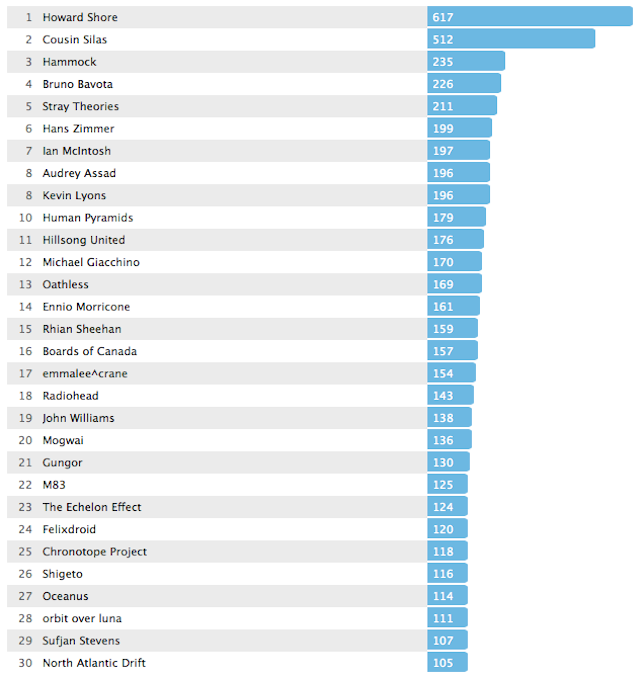 2013 was a great year for music and I'm not surprised by what is contained in the 'whole year' list.

Howard Shore stole the year ... but that's due to two Hobbit soundtracks and also my discovery of the Lord of the Rings Complete Recordings.

Cousin Silas got a lot of play too ... in part because I love his music and also because he was so prolific, especially in relation to my netlabel ... which I am eternally grateful for.

Other highlights included the discovery of Bruno Bavota's music - his piano-based neoclassical soundscapes are simply divine - and the launch of Audrey Assad's new album - an album I am proud to say I backed on Kickstarter.

A number of the artists featured here were passed to me to review ... and I am so grateful to the individual artists as well as 'This Is Not A Scene' and 'Echoes and Dust' for giving me the opportunity to write for them.

I will list some of my favourite albums of 2013 in due course.

Posted by weareallghosts at 10:44 am