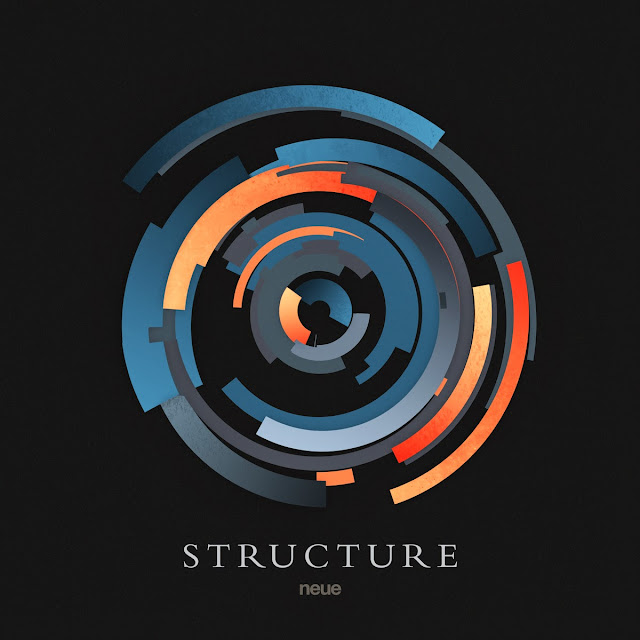 I love the music Mike Lemmon aka Neue creates and his latest release - "Structure" - builds on the already firm foundation he has in my consciousness.

There is a distinct progression apparent in the music presented on "Structure". Lemmon's previous release - "The Planets" - was a neoclassical tour de force that still gets played in my household ... his latest album isn't as singular, bring in themes and ideas from post-rock, ambient and even longform drones.

The album opens with "Dawn" ... an exquisite ambient piece backed with a field recording of a running stream. The ambient guitar and glockenspiel together sound so good making "Dawn" a brilliant opener.

Neoclassical purists shouldn't worry about the progression ... the cinematic orchestration is still apparent in "Into the Distance" ... but this cinematic vastness of sound is aided by rhythmic percussion (sounds like a vibraphone or similar instrument) that has a distinct post-rock feel.

"Underground" is a wonderful stand-out track with immersive beats and a haunting backing ... reminiscent of Amon Tobin's soundscapes albeit far straighter and less cut up. The track features melodic drones and has an air of the future ... the Blade Runner / Wipeout (computer game) kind of future.

"Illusion" is a more ambient affair ... a delightful, melodic experience with beautiful synths and a repeated note that creates a lilting rhythm.

"Vital" on the other hand is a more upbeat slice of electronica with melodic piano, beats and a droning backing. I found this track utterly engaging and memorable ... a highlight on an already strong album.

This electronic feel is maintained in "Runaway" with glitchy percussion and a melodic sequencer underpinning another delightful melody played out with piano and strings. It is a rich, full bodied, euphoric track that I cannot get enough of and have had it on repeat on more than one occasion. The big percussion is fantastic ... this is a track that needs a hi-fi to be fully appreciated.

The penultimate track - "Emerge" - has a singular Morricone-esque melody that plays over a haunting ambient soundscape ... it is the perfect come-down after the euphoria of the previous tracks. Around the 2 minute mark the melody becomes more apparent ... a haunting, otherworldly melody that makes me smile.

We then arrive at the closing track - "Eternal Machine" - which is a full-on longish-form ambient drone. This track does seem slightly out of place ... it is a beautiful drone, don't get me wrong, but it lacks something of the variety of the other 7 tracks. I guess it is let down by being in the company of and therefore compared to truly exceptional music. It is a beautiful track but would sit better with others of it's ilk or on its own, rather than as the ending to "Structure".

That said, I thoroughly enjoyed "Structure" as a whole with "Eternal Machine" included ...  it is a powerful testimony to the progression and growth Lemmon has experienced as a musician ... and a really treat for music fans like me who love their ambient, post-rock and neoclassical expressions.

I cannot recommend this album highly enough and know it will feature in my end-of-year list for 2014. Have a listen below to see if you agree:

Posted by weareallghosts at 11:14 pm