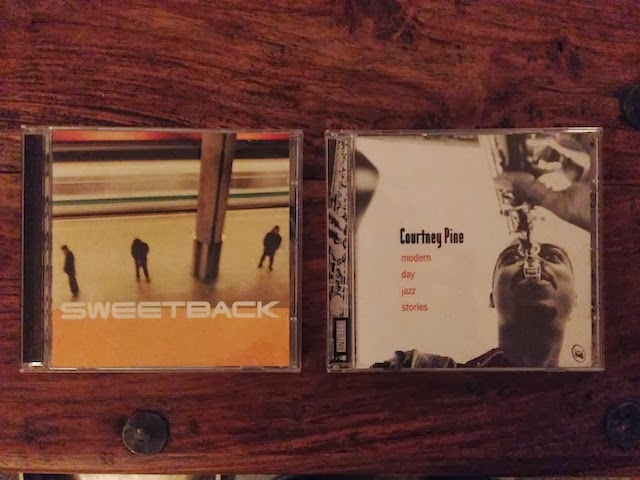 Yesterday I was fortunate to pick up these CDs in my local Poundland of all places ... I had nipped out for a wee while to get me out of the house (this whooping cough is driving me insane!).

First off, we have Sweetback's self-titled debut album. I love this album and readily admit to this being my second copy ... I couldn't help myself, I couldn't leave it on the shelf ... this album, on Epic from 1996, is a masterpiece of soulful sounds.

Sweetback are Sade Adu's backing band - Stuart Matthewman, Paul Spencer Denman and Andrew Hale. They make the most glorious of sensual, seductive soul ... with guest vocal contributions from the likes of Maxwell and Amel Larrieux. They've only recorded two albums as a group in their own right ... the second doesn't quite work the same as their debut ... I guess the planets were aligned when they were recording. Recommended.

We then have "Modern Day Jazz Stories" from Courtney Pine on Talkin' Loud. Ironically I have this album on vinyl ... but was eager to snap it up on CD when I saw it.

Another album from 1996, this features some fantastic modern jazz from Mr Pine ... with some vocals from Cassandra Wilson. Each track was recorded 'live' and manipulated by Pine. It really works for me and whilst there is a DJ in the mix doing a wee bit of scratching it hasn't really dated too badly ... it sounds as fresh as it did back in the day. I think I'll bring the LP down from the loft and put this CD onto iTunes then into the car.