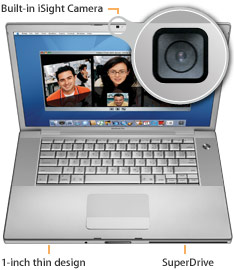 Well that's all folks... as they say. I never got a chance to digest the Stevenote as I had places to go and people to see... but from what I have read, there is some pretty amazing kit released. Check out TUAW or Gizmodo for a better run down.

* Updates to the iLife suite - Photocasting in iPhoto, support for 3rd party DVD burners in iDVD (hurrah) and a new app called iWeb for publishing iLife content on the web via .Mac
* Introduction of a FM Tuner / Remote for iPod.
* Updates to OSX (now 10.4.4), Quicktime (now 7.04) and iTunes (now 6.02)

Disappointing not to see a Mac Mini Media Centre or some form of "Son-of-Newton" iPod/PDA combo... but all in all its a pretty good day to be a Cult of Mac devotee.

Check out the Apple site for more detail: http://www.apple.com/uk/
Check out TUAW, Engadget and Gizmodo too.
Posted by weareallghosts at 9:33 am