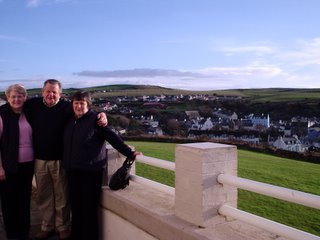 At approximately 2310hrs last night (17th January) my Uncle Robert "Bob" Finlay lost his battle with cancer and was called home to be with his Lord.

His condition deteriorated over the weekend - he began to really struggle for breath. He was admitted to hospital on Monday with concern that the cancer had spread to his lungs.

I saw him yesterday and I have to commend him for his positive outlook - he openly stated that his situation was in the hands of his Lord - and he retained his humour and love for the people in his life.

Bob was a husband, father, brother, uncle, friend... He was a great influence, teacher, jack-of-all-trades, printer, Mac user (G5 PowerMac!!!), lover-of-boiled-peas... Most of all he was a follower of Christ and an inspiration to all who knew him.

It is bitterly sad to lose Bob but it is to be celebrated that he is with his Maker.

See you soon...
Posted by weareallghosts at 9:42 am

You're right, he has gone to a better place, but he will be missed. I'm sad that I didn't get the chance to know your uncle Robert as well as you, but I'm happy I had the opportunity to meet him. He was always very kind and gracious to me, and I won't forget him.

Pass on my most sincere condolences to your immediate and extended family and my thoughts are with you all at this difficult time.

I'm here for you if you need to chat or if I can help out in any way.