Bob on the button once again... 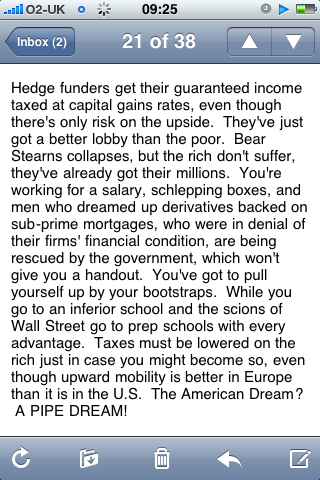 The above quote was taken from one of Bob Lefsetz recent letters :: We can't make it here. Once again he is on the button with his social commentary. This whole bail out of the financial industry has me unsettled. It seems like the world's governments are bailing out the rich to protect the fallacy that is trickle down economics - protect the rich and, in doing so, you protect the poor.

Thing that got me is almost a throw away line in the paragraph above...

They've just got a better lobby than the poor.

I don't know about you but I think this is a terrible indictment to the failure of the Church (singular) to effectively stand up for the poor. We are the lobbyists for the poor. Why? because the poor will be with us always... they are us... we are them... and we need to stand up for those who can not defend themselves.

We are part of a better way. A way that puts loving our neighbour AS OURSELF in the centre of our faith. If social action isn't on your agenda then you better get your head back in Scripture. Jesus didn't command you to preach the Gospel to the detriment of action... He commanded you to LIVE the Gospel to the INCLUSION of everything and everyone. Where can we bring healing to this world if we can not stand up against the practices that allow the rich to get richer at the expense of everyone else?

Doctors and Nurses heal... sure they do... and they do a mighty fine job! But we can bring healing too... by seaking to stop the things that cause the illness in the first place. By calling out and confronting all the pimps and hustlers in their bling and tailored pinestripe suits. By standing up for and with the poor.

Let's use the example of William Booth who changed the face of matchmaking and in turn British industrial health and safety practice. He didn't just campaign against the practices that were killing the workers... he proved a viable alternative was possible. With nimble ju jitsu he used the capitalist economy's weight against it... and brought it down.

We are the poor!

Picture posted with LifeCast... thoughts added later.
Posted by weareallghosts at 10:31 am