Bob on the button - Jesus was a Democrat... 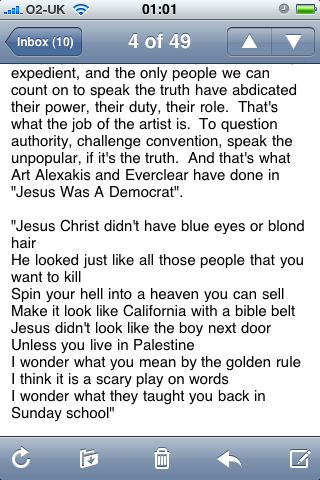 Thanks again to Bob Lefsetz for challenging me with his email/post.

We’ve got the businessmen raping and pillaging, the politicians lying, at best being expedient, and the only people we can count on to speak the truth have abdicated their power, their duty, their role. That’s what the job of the artist is. To question authority, challenge convention, speak the unpopular, if it’s the truth.

That's a telling observation. Who is telling the truth?

Add to businessmen and the politicians... the men and women who want to keep Church the way it is... keep their powerbase. People given the responsibility to tell the Good News to the Poor... just as everyone who claims to follow Jesus have been given... are the ones who have shaped their Lord and Saviour into someone they can use for their own benefit... to promote their own agenda... they are the ones who will be offended by the Everclear song that Bob quotes above:

I bet you think of him
As a nice clean long haired Republican, nah
He would be all locked up in Guantanamo Bay
If he were alive today
He would have been a revolutionary
Wanted by the CIA

I believe Jesus is alive today... otherwise... I think this is a bang-on observation... a fantastic critique of the people who claim to love Jesus but, by their lives, deny Him.

Think about it... and spread the truth. Don't rely on those who have a vested interest in keeping the Church as it is to do it for you. Get out there... voice your dissent about the injustice in this world... ($700billion... anyone???) and let people know there is Good News.

Picture posted with LifeCast... thoughts added later.
Posted by weareallghosts at 1:07 am