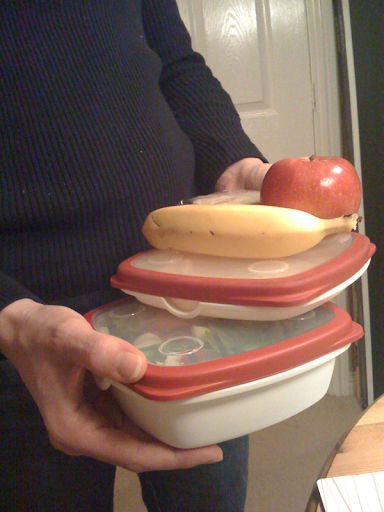 Olly has been a gem. After the initial shock and denial... she's been fantastic. Tonight, for example, we had tuna with a small portion of potatoes and a mixed salad with spinach, peppers, onion, lettuce, tomato and loads more. It was fab.

For tomorrow's lunch (I'm at work tomorrow... Olly and the we'ans aren't... we are all off from Tuesday onwards) I have salad (big box), turkey (small box), some fruit and some oatcakes. Excited already.

What's my inspiration? Why am I doing this?

Well I need to for my health. I want to see my kids grow up and have kids (if that's what they want). I want to take Olly to NYC for some significant birthday and/or anniversary at some point in the future.

I have been inspired by Lard and JDBlundell... as well as my folks... and Olly herself.

If I speak with human eloquence and angelic ecstasy but don't love, I'm nothing but the creaking of a rusty gate. If I speak God's Word with power, revealing all his mysteries and making everything plain as day, and if I have faith that says to a mountain, "Jump," and it jumps, but I don't love, I'm nothing. If I give everything I own to the poor and even go to the stake to be burned as a martyr, but I don't love, I've gotten nowhere. So, no matter what I say, what I believe, and what I do, I'm bankrupt without love.

So when I get up early to exercise... or my feet hurt from walking round Strathclyde Park (4.7miles)... or I am jonesing for some chocolate or blue cheese or chocolate covered blue cheese... I just need to think about love.

btw... Love by the Beatles makes for a good walking-round-Strathclyde-Park soundtrack... and reminds me why I am doing this too.

i better get to work.

we rode our bikes for about 8 miles the other night but then had fried chicken last night. better get out on the bike again.

doh. keep up the good work!