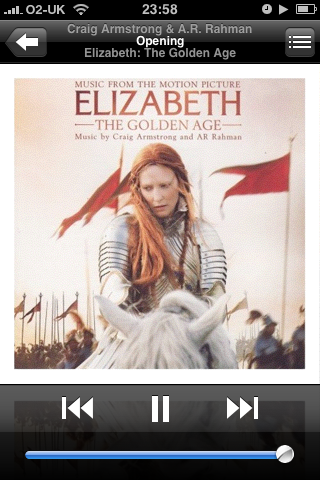 I am a big fan of Craig Armstrong and am loving his collaboration with A.R.Rahman for the film Elizabeth: the Golden Age.

It is a stirring and emotional score that sounds familiar and is unmistakeably Armstrong... and yet it is intriguing in its flourish and remarkable sonic diversity. It is a strong soundtrack... one that works on its own... in addition to the backing the film (which I watched on the flight home from Newark earlier in the year) superbly well.

Picked it up for £6 in the HMV sale. Well worth checking out.

Picture posted with LifeCast... comments added later.
Posted by weareallghosts at 12:00 am