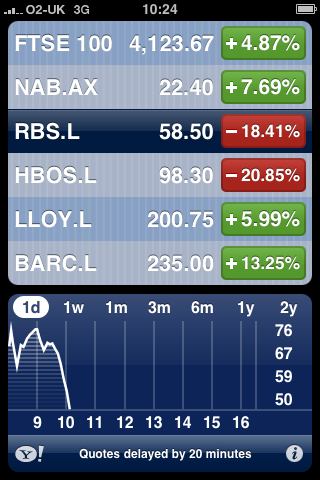 ...People respond to incentives. There is no law of nature that would result in all the greedy and stupid people being attracted to, and rising to the top of, the banking industry. So you have to assume that where the financial institutions went wrong was that incentives were misaligned, and there was a collective failure of leadership to see the writing on the wall.

This was not all the fault of the bankers. More conservatively minded banks, such as the UK's Lloyds TSB were coming under investor pressure a couple of years ago to be more adventurous in pursuit of higher returns. They resisted the pressure, but the people that tell you that management is merely the servant of the shareholder would generally frown on the fact. In this sense, you get the bankers you deserve.

Does this mean that nobody was greedy? No, but it was the same collective greed that persuades otherwise rational groups of people to believe that the laws of gravity have been suspended, and there are just piles of cash waiting for the brave to scoop them up../

...At the moment, pay scales are so high that CEOs can console themselves over the high probability that they will only be in post a short time (the average life of a CEO in post is 3 years) by the fact that they may earn enough that they never have to work again. If it all goes wrong, that is some compensation.

That creates incentives to play for the short term, and to take risks that may lead to problems later - after the individual concerned has moved on.

Perhaps the incentives should be changed. The boss starts at the company with a small salary, which is due to progressively rise over ten years. By the end of that time, the compensation - tied to the success of the company - is very significant. And doubles in size once he or she has carried out a proper process of succession planning../

...Who are the leaders prepared to go against the prevailing opinion in an industry? Who has a track record in creating empowered companies, with employees working together to create real value? Who is passionate about the product or service because of the positive value it can add to people's lives? These are the leaders we need.

Everything must change... and this change starts with you and I!

Picture posted with LifeCast... thoughts posted later.
Posted by weareallghosts at 10:34 am