Speaking on Beijing Radio station, musical director Chen Qigang said the organisers needed a girl with both a good image and a good voice.

They faced a dilemma because although Lin was prettier, seven-year-old Yang had the better voice, Mr Chen said.

"After several tests, we decided to put Lin Miaoke on the live picture, while using Yang Peiyi's voice," he told the radio station.

"The reason for this is that we must put our country's interest first," he added.

"The girl appearing on the picture must be flawless in terms of her facial expression and the great feeling she can give to people."

Am I the only one disturbed by this? We condemn athletes for cheating and yet the Hosts actively deceive the world with this Milli Vanilli... How dare they say the wee lassie with the voice isn't picture perfect... that's shocking! She's a bonnie wee lass in her own unique way. In fact, she is an image bearer of God... someone who was fearfully and wonderfully made... just as we all are!

Reminds me of the lyrics from a Disposable Heroes of Hiphoprisy track called... Television drug of the nation...

Shame on you Mr Chen! Shame on you for putting your country's image before the talent of a little girl. 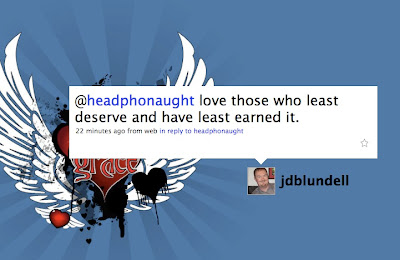 This is the tweet JD refers to in his comment... and it is so true. We are all worthy of love regardless of our appearance, talent or abstract that we use to differentiate ourselves. Why? because we are all the image bearers of God... made in His image... all worthy of our time and space.

Posted by weareallghosts at 6:28 pm

i agree the actions weren't the best. but here's what comes to mind:

I agree with your comments and I hope that you find the article in The Scotsman I mentioned in my phone call.
What unscrupulous comment by a PR individual not only to applaud the cheating (sic) of the Chinese in their Television presentation of their fireworks and this girl singing but hoping that London is able to cheat "twice as good". Television Authorities have already lost much credibility in the light of the phone in scandals, we are beginning to wonder what else will be done.