To some people in the Salvation Army this is tantamount to sacrilege... but to us its a necessary step. We need to get our priorities right... our Founder didn't say:

We need to find our fight!

So we're taking some time out. We haven't said we won't be back... and haven't burned any bridges. We need to rest... with our inspiration for this coming from Matthew 11: 28-30... 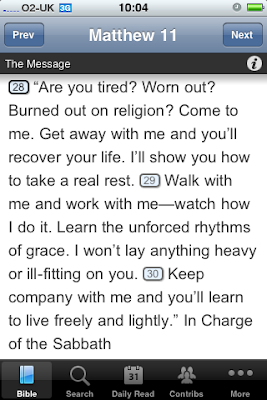 So this morning we sat back... soaked up all that was prepared... and were knocked off our feet!

First off... the YP Band played the song that's being going through both Olly's and my mind this week... Matt Redman's The Heart of Worship ::

By opting out of the sectional worship, we are able to strip a layer of busyness away... a layer between us and God... and just simply come into His presence. We gathered for worship and it was all about Jesus... not about what we had to do or when we had to take part... just Him.

Then the Songsters sang a song that says "all who are weary... come home"... which was so apt for where we are.

Afterwards... Major Alec spoke on obedience... quoting Acts 9. He emphasised the fact that we are ALL called, in some way or other, to do something/be someone/be somewhere that the Lord has called us to do/be. There should be no spectators in this fight. We are all called to different things :: Saul was called to his journey... Annanias was called to accept Saul... what would have happened if Saul or Annanias had refused their calling? And yet we are all called to work together.

He spoke to us... but, more importantly, he spoke to everyone gathered. We all need to understand our calling.

Then to sum things all up... the Band played a tune that speaks of being "in the love of Jesus..." where "...there's perfect rest".

Rest. There is an irony that we were ministered to by the Sections we are on hiatus from... and I'm not sure what to say about that other than our experience is a Mary AND a Martha thing.

Martha criticises Mary (and indirectly Jesus) because Mary sits listening / being with Jesus while she is busy preparing stuff. We side with Mary... she gets who Jesus is... but then so did Martha... who, no doubt, was preparing the food/drink and being hospitable.

We need to be like Mary... and take time out to sit and listen to Jesus... but this time out is only to prepare for the time we are called to be like Martha and do the jobs allocated to us.

This is a faith AND action thing! The Army, in my opinion, has become too busy... to action orientated without the balancing act of sitting at Jesus feet. I have witnessed too many people express their faith by what they do or don't do... and not who they are. Last time I checked, this is how the Pharisees expressed their faith... "Thank you God that I am not like this Tax Collector... etc... etc".

I am not criticising the action... far from it. God needs people who are prepared to do what He wants them to do. BUT we need to ensure we are ACTUALLY doing what He has called us to do. How do we ensure this..? by sitting at Jesus' feet and keeping company with Him.

This is why we are doing what we are doing... and why I would encourage everyone engaged in the fight to make sure they are doing/being what the Lord wants us to do/be.

Posted by weareallghosts at 4:22 pm

thanks for sharing Thomas. Years ago, I took a step back from the band at the corps I was then at for the same reasons you have shared, and found out the word had been spread from band leadership that I needed prayer because I was slipping away. Infact, they were slightly true - I slipped away to another Corps but not for that reason I hasten to add. Anyway, I know about the need to not be so busy that we miss Jesus. I've been reevaluating over recent months too and have already pulled out of one of my responsibilities and have made a decision about another one too. My problem was everything i was doing, I was doing because I could - and I enjoyed doing it - and it was for God. but it also took lots of my time away. So i have made some hard decisions too. Ones I have put off and yet God has opened the way and made the whole thing clearer.
I continue to pray for you and Olwyn especially as you spend this time evaluating and regrouping. May God speak clearly to you about what he wants you to do and where he wants you to be.
Dan
PS - on a lighter note...whats with the shoes mate??!

Our prayers are with you daily, Thomas & Olwyn. May God bless you as you experience that what you are before God is more important than what you do.

Wow! you have got it in one, hit the nail on the head, etc...etc... You are soooo right! You might never know how much I needed to read your thoughts on this matter of being vs doing, not that it has to be one or the other but we seem to sometimes make it so. One needs to come out of the other. I very much like your W.Booth thing! I recently quoted him like that also by saying, while the homeless are about we help but not if the meeting has already started, not if the meal at the Army on Sun is only for those collecting and counting and we can't help those who smell as the odour is likely to upset the people who come to the next activity...
Oh, well I've said it and published it now. Are my days numbered? I hope not!!

Hey everyone... thanks for the comments... appreciate you taking the time to respond... I'm not the best at responding.

@Dan... its true... it is tempting to do what we can not what we are called to... because we can and because we do enjoy it. We need to find out what the Lord wants us to do... not what we want to do for Him. Hopefully, however, the two will overlap.

Thanks for the prayers!

@dad... thanks for your encouragement.

@Marta... I look forward to meeting you (God willing) in November. I am glad my thoughts helped you in some way. We need to fight... singing and playing is all find and well if it is secondary to the calling / action / being God has called us to. If your days are numbered... then God help us all. The Salvation Army is not a monoculture and dissent is in our blood... as long as it is God honouring and done for Him. I believe we have become the Church Booth raised the Army out of... and God forgive us for that! We need you to remind people of who we are called to be... BLOOD AND FIRE!!!

Oh and @Dan... the shoes are Nike Air Rifts... designed for African runners... they make nice summer shoes... even with the split toe.