Conversation over coffee and tea... 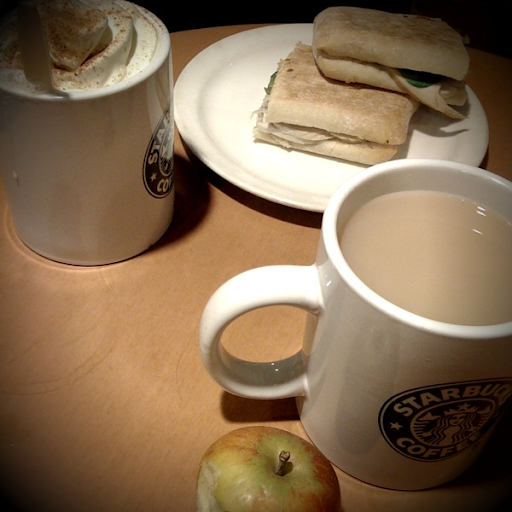 Met up with Stewart Cutler yesterday for a chat... His was the sandwich and the gingerbread latte with cream on top... mine was the Earl and an apple.

We talked on many different things... the podcast... books... getting together with our better halves for some food... etc etc.

One thing that was meaningful that I wanted to share was Stewart's sense of seasonality. I was talking about Street Pastors and expressing my worry that for some people this is the latest Christian bandwagon on which to jump on. I was not and am not critical of the movement or the good work they do... I just see it as being "the next big thing" in a church culture that is obsessed with the next big thing.

I see a faddiness in the church... where ideas are imported from places where they work and "made to work" without any real consideration for the "from" context or the "to" context. Things fail as a result... and on we go... seeking the next thing that will make all our dreams come true.

Context is vitally important. I work for an Australian Bank... we can't just take their latest idea and implement it in the UK market... without contextualising it first. That's for another discussion, on another day.

Where our discussion went was on seasonality and the idea that somethings have their season and we should let them go when they have out lived their time. Maybe my criticism of activities as being faddy is just this... they have their season... after which it is time to consider new ideas or seek new sources of creativity. Some people may see them as being a fad whereas others may see them as having their season. I would prefer to look at things as the later.

I think what is worse than jumping here, there and everywhere following the latest fad... is to stick with something passed its season and keep on going... flogging a dead horse, so to speak.

We never really finished the discussion... and I think this will become an ongoing theme just like the conversations I have with Jon G around "places" vs "relationships". Its just that I don't think this is a "vs" discussion... its more an unraveling of an idea.

With further thought, I think my issue is with continuity. I accept things change... life is cyclical... and seasonal... so how do you keep stuff moving... keep things continually moving... if we are jumping from one thing to another?

Somethings need to be given space to become whilst others need room to die... most need to simply live and grow and evolve.
Posted by weareallghosts at 2:27 pm

I realise that you are not down on the street pastors but I just want to big them up. They operate out of our church buildings and we open up our cafe late night for them sometimes. Its hard and dirty work amongst late night revellers almost certainly worse for wear and often vunerable. There aren't people queuing up to work between 11 and 1 or 2 in the morning...just to be there for what ever.

No big expectations from the group that go out...just conversation...a safe place...the chance to sort someone out with a taxi....stopping the odd fight or two. Its not the next big thing for them just their thing. I couldn't do it. Not my thing.

If they hadn't imported the idea I hope someone would have had the gumption to invent it here.

I don't know how long it will last for one season or many but I know I grateful the are there doing it now (not least because I got to meet Paul...who's a cool bongo player and encyclopedic about films...although he does smell a bit :-) )

Anyway perhaps it proves the point...its local and fits a need in the nighttime landscape and the group go about things very quietly.

I totally get what they are doing and welcome it. I think the people doing it are, in the main, there because they see it as an extension of their calling and I hope it lasts for many a long season as it is needed in Glasgow.

My thoughts were around the folks who jump from one thing to the next.

Alpha one minute then Contagious Christianity the next. Now they are on to Street Pastors or something similar. It is the fashionable thing right now.

I dont want to see fadism in the church without some sense of continuity. It seems to be the same 20% that are doing 80% of the work... when they jump to something new they leave behind work.

Is that work closed off or just left to wither and die?

So yeah... I totally welcome the Street Pastors knowing it isn't something I could do. I am all about relationships and I see this movement, as long as it remains a movement, as being about building trust and relationships.