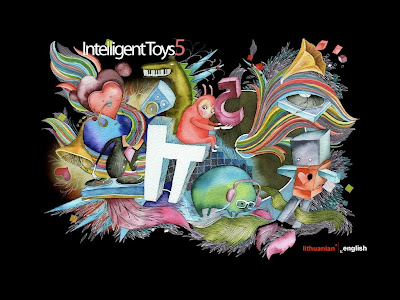 Sutemos have released the 5th installment of their "Intelligent Toys" compilations... and it looks mighty fine! Maps & Diagrams, IJO, Sleepy Town Manufacture, Leon Somov, and one of my fave artists Ulrich Schnauss are all represented. This looks to be another awesome collection of the best on the bleeding edge of electronic music. Here's how they put it:

After releasing the second volume of Intelligent Toys series we said to ourselves that it is probably the last one in the series. Just because we thought that it is impossible to beat the quality we have created ourselves. And after that we released third volume. Fourth volume wasn't long to come. And every time we thought the same. Although not all of them were better than previous ones (for some of our fans first volume still remains the best).

So it's no surprise that this time we also think that it is impossible to make a better compilation. As the matter of fact we aren't sure about the sixth volume. The reason still remains the same. But this time we have prepared even three hours of various music. As usual we offer you to download all of our intelligent toys and pick the ones that best fit your mood, taste and weather outside your window.

It still remains a mystery for the artists, journalists and for some of our listeners how Sutemos manage to gather so many famous electronic music artists and give their music away FOR FREE. Fifth volume of Intelligent Toys is featuring 39 tracks which were selected from more than 100 pretenders. As the matter of fact we can create couple of awesome compilations from everything that is left. This time we serve you probably the biggest number of highly acclaimed artists that aren't collaborating with any of the net labels and who thought that giving their music away for free is stupid. Until now../

Yes... 39 tracks PLUS awesome artwork PLUS a Sleepy Town Manufacture video... It doesn't get much better than this. Thank you, Sutemos!