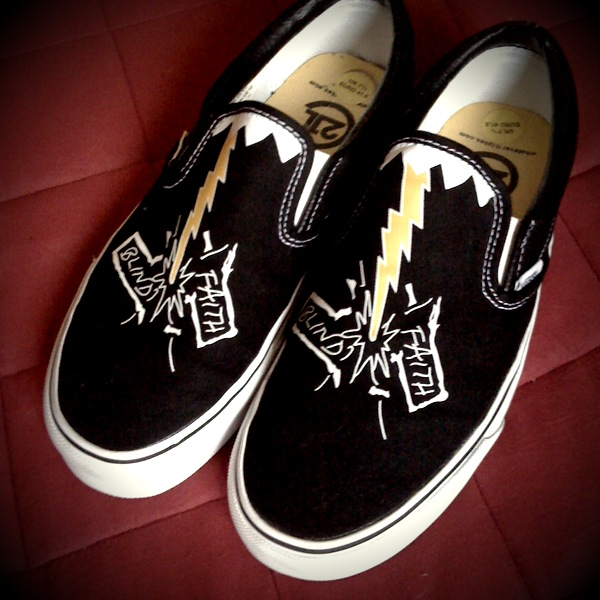 Picked these shoes up yesterday for £3.00 at my fave shop TKMaxx. I didn't need a new pair of shoes but kind of fancied them. I like the design :: blind faith :: and the slogan on the sole :: Don't die ashamed :: and thought they were very uplifting. My faith isn't a blind faith (it isn't a cerebral faith either... its more considered) and I do not intend to die ashamed... in fact I don't want any shame, thank you very much.

I did a bit of digging on them. They are VANS produced in conjunction with 21st Century Leaders... which is:

...a unique charity artwork project. The concept is simple. We gather artworks from leaders in all fields; royalty, film, music, Nobel Peace Prize laureates, sports, literature etc. Each ambassador donates a symbol of hope, a self portrait and a message of hope for the future.

The aim is to raise a minimum of $3 million over three years to fund charitable projects in developing countries, contribute to the protection of the environment and other charitable causes.

Products are sold, with the promotional support of our leaders, through retail partnerships, editorial, brand promotional partnerships and on the 21CL website. In the process we strive to assist and encourage a generation of influencers, to take ownership, positive action and raise awareness among their fans, for a global international development cause. We call the campaign www.whateverittakes.org.

I welcome this idea and celebrate the efforts they are making... putting meaning into the things we buy. I'm not sure how successful they have been to date... haven't seen much of their stuff on the street... but then maybe I have and haven't realised... and if this is the case, then maybe that's all the better... because the product lives in and of itself... as a result of the direction from the leader and the manufacturer.

One thing that does concern me... slightly... is their choice of leaders. If you read their list of contributors there aren't many people that stand out and inspire me directly. Archbishop Desmond Tutu... Moby... Sir Richard Branson... Sir Bob Geldof... Coldplay... and Benjamin Zephaniah... are about the sum total.

But then maybe that's the point... people with reach in their own unique way to people... people who don't reach me but reach others. I see this as breadth of reach.

Ironically, the shoes I bought were designed/inscribed by one Ian Fraser Kilminster aka Lemmy from Motorhead whose song "the ace of spades" is considered an all time classic... and that's about it for me. I have to say his artwork and message of hope work for me.