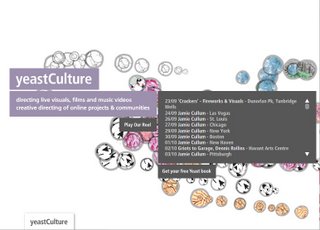 Check this out... yeastCulture are a couple of super VJs called Mark Silver and Nick Hillel who have worked with some amazing folk. I found out about them through Cool Hunting who were pimping them big style. They have worked with folk like Nitin Sawhney and Matthew Herbert and have been involved with the Big Chill. They are, by all accounts, going to make the Beeb's Electric Proms all the more special... which would be wonderful to see.

Check out their site... download their showreel for your iPod or PSP... and order their book. I did and its really special. Great imagery and fantastic quotes... including this one from Mark Van Proyen::

"One can in fact behave in the manner of many tribal and non-Western cultures where they don't have a special term for art. Everything they do is understood in the context of a communitarian art project & the point is to involve people in the culture rather than separate them."

Really made me think... which is a good thing! Made me think of inclusive acts of worship and service... where the whole community are involved... where everything done is an act of creative expression, of worship, of service.

Posted by weareallghosts at 9:54 pm