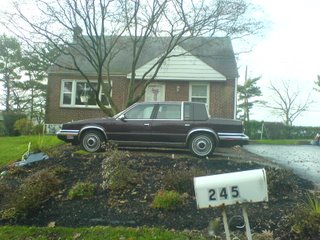 Saw this house and car on the way to the office today... took a wrong turning but got there in the end. Like Bob Ross always said... "There are no such thing as mistakes... only happy accidents!!!" and this was sweet.

The office is big... and new... and impressive. We have a conference room to work in and a pretty full schedule. 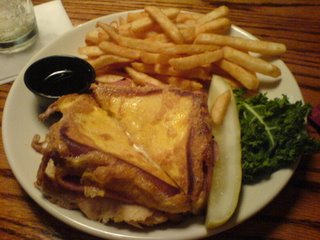 Went out for lunch at a local bar called Baxters near the office. I chose the house special sandwich :: The Baxter :: and need to tell you about it... this is a sandwich made of French toast or as they call it here TEXAS toast - why? I have no idea! but then again this is the country who renamed French fries as Freedom fries as a result of the French Government's lack of support for the war.

I digress... you have ham... you have turkey... you have grilled cheese. So far so good. You then have fries that appear to have been super fried... and maple syrup... yes, that's right SYRUP!!! - OMGoodness, no wonder obesity is a problem here... food like this and a hatred for walking...

Oh and yes, that is 1 quarter of a whole gerkin as garnish. It was a tasty sandwich... but I crave fruit... and green leafy things... and tomatoes. I miss my wife's cooking! 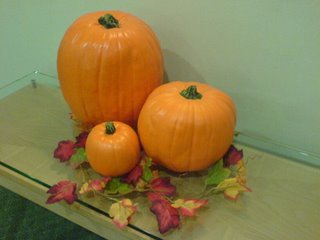 Thanksgiving is coming... loved this decoration in the office. 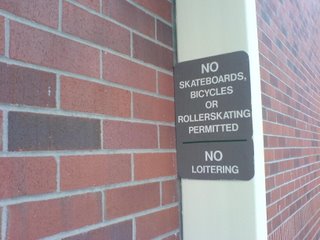 Took this pic while trying to walk off the lunch... Its seems having police with guns is OK here but don't dare skateboard... or bike. Shame really... as the street furniture and sweet curbs were crying out to be used in new and innovative ways.

After work I just crashed out... got lost on the way home... and it was nearly 1900hrs by the time we got to the hotel. My body needed sleep... although I did get to see Olly via iChat which was great.

I was invited to hang out at a Philly Emergent gathering (Thanks Bob!) but couldn't make it. Weather is awful... very strong winds and torrential rain... and I have reading for tomorrow. Hopefully I will be able to catch up with someone from Philly Emergent at the weekend to find out what's happening for the Lord in this fair city. 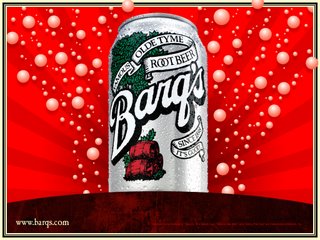 Later on I hooked up with the team and had a few root beers with them followed by a lovely pepperoni pizza in the hotel bar. I have developed a fondness for root beer... reminds me of mouthwash that you can swallow! The root beer of choice is BARQ'S :: it is owned by Coke... which kind of killed the romantic notion of it being a long, lost drink made by some small, local, independent producer. Its lovely!

Good Times!
Posted by weareallghosts at 4:18 am

Glad the weather is so different from your Homeland, Thomas! Perhaps investing in a pair of waders might not be a bad idea before you return.

Some people even put sugar on their porridge! Home cooking is always best. Hope you can enjoy some fellowship in the next few days.

Root Beer is the best! Although, if you think that Barq's is good wait until you've tried a chilled bottle of IBC...they are really special. See if you can get your hands on some tootsie rolls - they have a slight root beery taste (they're candy). Have a good time - ebay does root beer!

Mmmm IBC root beer. It doesn't get much better.
Also - I'm not so sure about that Texas toast. Doesn't look like anything we have here in Texas.
But check out Wikipedia's definition... http://en.wikipedia.org/wiki/Texas_toast
The Texas toast was first served at the Pig Stands on Calder Avenue in Beaumont, Texas. Royce Hailey requested that the bread from the Rainbo bakery be sliced thicker, but the bread came out too thick for the toaster, so a cook buttered both sides of the bread and placed it on the griddle to toast it medium brown.
For some reason everywhere you go you see Texas Steak Houses, Texas Tex-Mex, Texas Tea, Texas Toast and more, yet its never much like the originals.