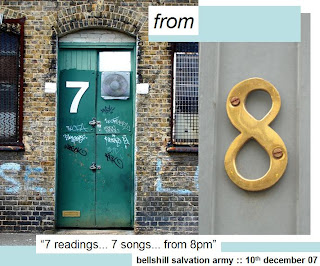 How do you define success? I have spoken about this before and I will answer my question by saying numbers do not necessarily denote success. I mean... Motherwell are the best football (Soccer for my US pals) team in the world... but they don't have the numbers to prove it.

S*N*A*C (Sunday Night After Church) scratches an itch for our crowd in Bellshill Salvation Army. Not everyone gets it... not everyone wants to get it! This has annoyed me before... but it doesn't now. Why?

Every S*N*A*C has brought someone new to Bellshill... and, for me and mine, that's success! 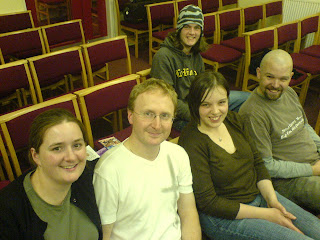 Carol-Anne, Dan, Dawn, Jon G & John B
Anyway, 7 from 8 was our interpretation of the traditional nine service... just kind of shortened to seven.

I kicked off with a movie entitled :: O holy night :: that follows someone building up Christmas decorations. I then went straight into a reading from Rob Lacey that highlighted the absurdity of Christmas without Jesus... or at least a wee, harmless we'an. "1" was completed with Olly's rendition of Heaven's Child by The Martins which is just simply wonderful. 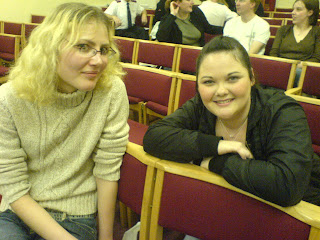 Marianne (from Estonia!) and Liz
We then had some fab readings from The Message and New King James translations by various volunteers. Interspersed with songs led by BLOC and In the bleak mid winter from Laura and Liz accompanied by Colin on acoustic guitar (I thought at one point he was going to start playing Stairway to Heaven).

All in... it was a tremendous experience that was completed by a lovely time of fellowship over coffee and mince pies.

One thing that is important for me is that Chris and Dawn (the officers from Glenrothes corps), Carol-Anne & Dan, and Jon & Lorna G came along. Its great to spend time with my friends... to meet Carol-Anne & Dan for the first time... and to minister to my peers. Its great to give back to the people who have given me so much! 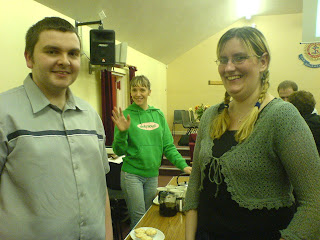 Chris, Olly and Laura
This is what Dan & Chris thought of S*N*A*C ::
Dan
Chris

Thank you to everyone who contributed!

Posted by weareallghosts at 8:34 pm

You know the reading you started off with? Could you e-mail that to me? I reckon that might be useful for our watchnight or Christmas Day meeting.