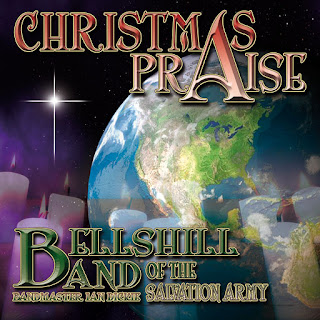 I've been listening to the new CD by Olly's band - the Bellshill Salvation Army Band - called Christmas Praise and I think its fab!

Brass bands make Christmas for a lot of folk... and if you are one of these people then you'll love it. I'm not a huge brass fan... has to say something new to me like the seminal Lester Bowie and his Brass Fantasy did a long time back. (saw them with Olly in Edinburgh around 1993 and were blown away - he's dead now - shame!)

What makes this CD special for me is Olly's solo :: Heaven's Child :: a song originally recorded by The Martins and a song that's guaranteed to refocus Christmas for a lot of people.

Tonight was the CD launch... and I missed it because Dayna is unwell and I had bowl-and-hair-holding duties (poor lamb is literally sick). By all reports, Olly sang well and the night was a success with approximately 420 folk in for the launch and a community carol service.

I recommend this CD... Its going to be on permanently over Christmas.

Check out the Band's website for more info :: BSAB.co.uk

Posted by weareallghosts at 11:31 pm

i had a look at the website and must say it's a very strange feeling to stumble across my officer's name on the repetoire! haha

The CD is very good and Olwyn's solo is simply excellent!