Sorry for the crazy title... its from a Living Colour EP - I always thought it was funny... I prefer the idea of a selector rather than a DJ... makes more sense, really. 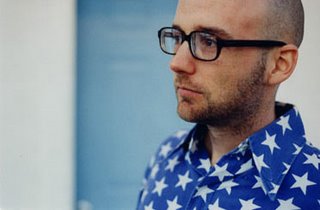 Anyway... Radio 6 are holding another of their selector events with everyone's favourite miltant Vegan Christian, Moby choosing the tracks... interviews... archive material etc on the 6th December. He has an eclectic taste in music... and even makes some good tunes himself (I like Hotel!!!) - my kind of chap. His journal is well worth checking out... its a bit USA-political but a good read nonetheless. His recent comments on American Right-Wing Conservative Christians is really on-point ::

i guess that what i'm trying to convey is my confusion as to why pro-war, anti-environment, anti-science, anti-evolution, pro-capitalist conservatives call themselves christian, when the teachings of christ are anti-war, pro-god's natural creation, anti-capitalist, and never mention homosexuality or abortion or evolution.

You reclaim the name, my brother!!!

And Courtney Love is no muppet. Still love your blog tho'

Let me respond here... firstly, and most importantly, Courtney Love is a muppet! I remember Hole and they were rubbish. She is famous only in a Paris Hilton kind of way... in fact, she's the Paris Hilton of the alt. rock scene. She hasn't added anything to mix... although I could be wrong... I'm not really into that scene anymore.

Secondly, I appreciate your comments about our Lord and His views on money... and will take time to think it all through. For the record... I am kind of mixed up and I assert my right to be mixed up - I am a pro-capitalist Socialist... maybe a compassionate capitalist? I don't know and I certainly don't want to get into any political debates. What I do know is that if you are blessed with money then use it wisely and give it away cheerfully. Say no to Scrooge McDuck!!!

Thirdly, thanks for the love, man. We can agree to disagree on certain things... its part of being free... and I think we are going to have to re Courtney Hilton.

Posted by weareallghosts at 8:11 pm

And Courtney Love is no muppet. Still love your blog tho'

Roy, don't be dissin' my man, Moby!!! He has GREAT insight in the monds and workings of Right wing Christian conservatives. Jesus was ALL ABOUT THE POOR. Moby is the kind of Christian i want to be around! EP

Jesus was into the poor and outcast, but also the rich and powerful. "The poor you will always have with you," etc etc. He was not a greedy capitalist or deluded communist.

Courtney Love may be a moppet but she's not on the level of Jim Henson's loveable creations. I cannot equate Kermit and Miss Piggy with Courtney, the frog and pig are just on a higher level than her.


I think Moby has a lot of good things to say, and I have some of his records and DVDs, but the jury is out for me on his political views. I'm more into the CS Lewis & Rick Joyner's ideas on wars & governmental authorities.